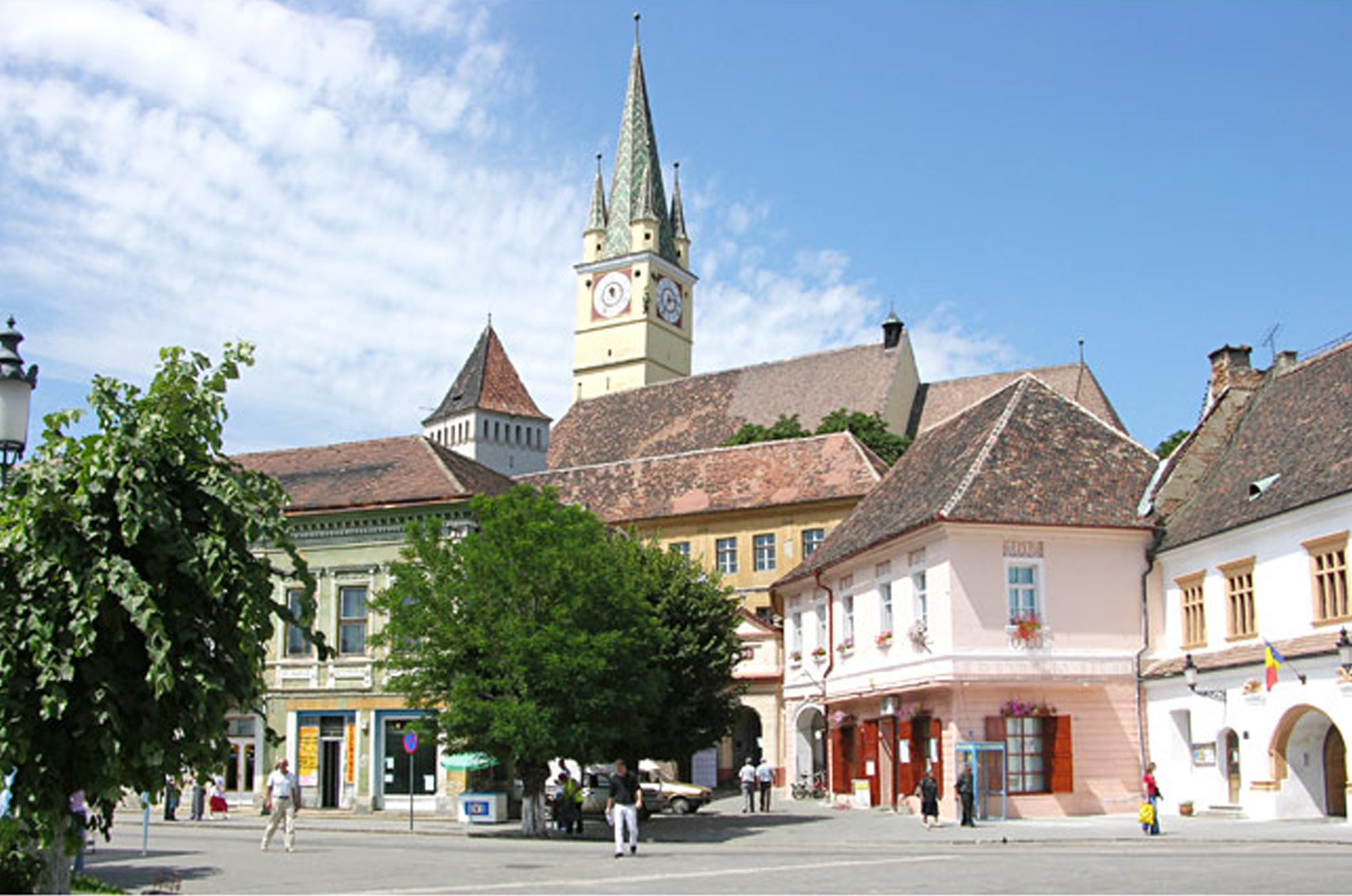 Although evidence of human presence in the area dates back to the middle-Neolithic,
Mediaş was first mentioned, in a writen document, during the Roman occupation as Per Medias (meaning the town at the crossroads).
In 1283, after the Saxons settled in Transylvania, the city became Sacerdos de Medias, and in 1389, it was renamed Villa Medies.

During the Middle Ages, Medias, like most other towns in Transylvania, was strongly fortified.
The town's 33 craft guilds built, maintained and defended the citadel's towers and bastions meant to protect Mediaş from invaders.
The fortified church of St. Margaret represented the core around which the citadel gradually developed.
The center of the ancient settlement of Medias has maintained a medieval feel with narrow winding lanes, centuries-old houses and a large square surrounded by colorful facades.


Built in gothic style in 1444, this church was renovated in 1742 in Baroque style;
a Rococo style altar was added in 1772.
The annex once served as silversmiths' workshops.

In 1476, Prince Vlad Tepes (aka Vlad Dracula) was briefly imprisoned in Maria Tower,
one of the nine towers built to defend Margaret Evangelical Church.

It was in this house that historian and Lutheran pastor Stephan Ludwig Roth (1796-1849) was born.
Roth challenged the 1884 Magyar Diet's decision to impose Hungarian as the official language in Transylvania.
As Romanians made up the bulk of the population, Roth claimed that Romanian was justified to be the official language. His progressist ideas led to his assassination in May 11, 1849.

In 1450, the Tower of Trumpeters was added to the citadel's defense system.
The structure got its name from its intended role as an outlook post: guards on duty would search the horizon and sound an alarm by trumpet to warn people against enemy attack or fire.
In 1880, a huge clock, showing the phases of the moon, was set up in the tower.

In 1549, Mediaş Town Council decided to make the tallest tower of the St. Margaret Church 35 ft. taller.
However, the foundation could not support the additional weight and, as a result, today
the 228 feet-high “Trumpeter’s’ Tower” has a tilt of 1.95 degrees.

Explore the surrounding countryside, home to more than a dozen Saxon fortified churches,
some of which are UNESCO World Heritage Sites.


Located in smal village Valea Viilor (translation: Valley of Vineyards), this church was built in 1263 in Gothic style and was enlarged and fortified in the 15th and 16th centuries. 26-foot tall and 5-feet wide thick defending walls are surrounding the structure.
The chirch is home to a unique collection of Saxon furniture, dating from the 16th century.


The 13th-century Biertan Church, a UNESCO World Heritage Site, stands strong, surrounded by 35-feet high walls,
on a small hill in the middle of village Biertan (Bierthalmen or Birthälm - Berth's hill in German).
From 1527 to 1867, Biertan was the seat of the Lutheran bishops.

The first rural pharmacy in Romania opened in Biertan in 1807.