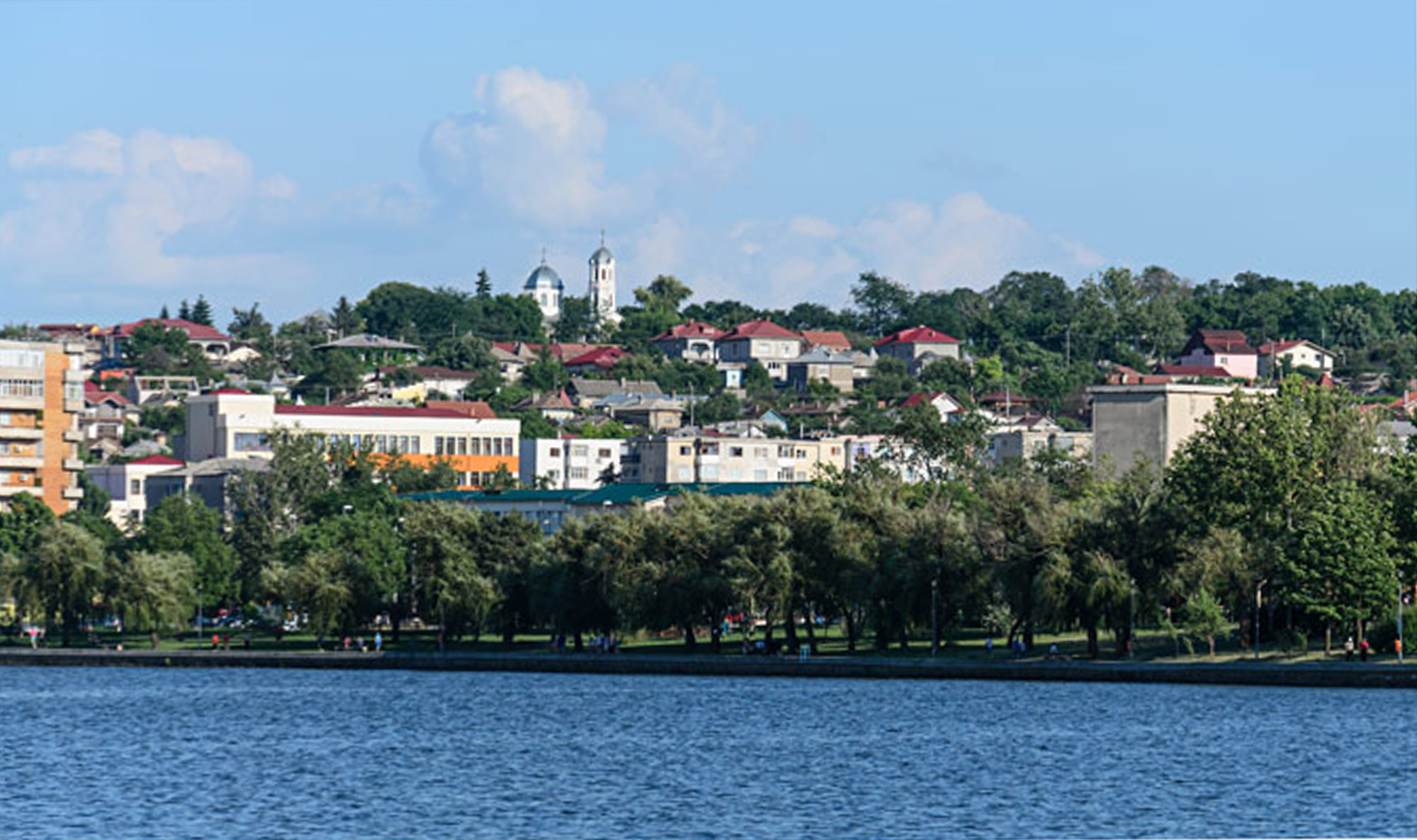 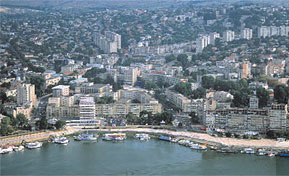 The city of Tulcea, laid out on seven hills like Rome, has been an important harbor since ancient times. Founded in the 7th century BC by the Dacians, Aegyssus, as the city was known in antiquity, was conquered by the Romans who rebuilt it after their plans, their technique and architectural vision. Aegussyus was first mentioned in the documents of Diodorus of Sicily (3rd century BC) and later, in the works of the Latin poet, Ovid, who referred to it in Ex Ponto, attesting that the name traces its origin back to its founder, a Dacian named Carpyus Aegyssus.

The town was successively under Byzantine (5th - 7th century), Genoese (10th - 13th century) and Ottoman rule before finally being reunited with Romania in 1878.

Some of the highlights include St. Nicholas' Church (1865), the Azzizie Mosque (1924), the Danube Delta History Museum, the Art Museum, and the History and Archeology Museum. The local Lipovani Russian and Turkish minorities lend the city a multi-ethnic flavor.

Address: Str. Gloriei
Open: Tue. - Sun. 10:00am - 6:00pm (Oct. - Apr. 10:00am - 4:00pm); Closed Mon.
This museum presents a history of the northern Dobrogea region from ancient times to the medieval age. On display are some 90,000 archaeological objects, numismatic pieces and old documents organized in special collections which include ceramics, bronzes, sculptural and epigraphic pieces, jewels and paleo-Christian objects.

Where: 18 miles west of Tulcea
Access: car, bus
The town of Niculitel is well-known for its vineyards, but also for a Christian basilica built in 370 AD during the reign of Emperor Valerius. In 1971, a violent rain washed away the earth concealing the church, revealing a unique monument, a crypt housing the bones of four Christian martyrs (Zotikos, Attalos, Kamasis and Phillipos). The four coffins can now be seen at Cocos Monastery. More info:
Sarica Niculitel Vineyard
www.alcovin.ro/en/index.php

Where: 18 miles west of Tulcea
Access: car, bus
Celic Dere Monastery (meaning "Steel Brook" in the Turkish language) was established as a monastic settlement in 1841 by Romanian and Russian monks. The monastery's museum contains various religious objects, a rich collection of old books, antique handmade carpets and the oldest icon in Romania, brought from Mt. Athos in Greece.

Where: 18 miles west of Tulcea
Access: car, bus
Cocos Monastery was established in 1833. Besides the impressive collections of fine and decorative art, archeological finds and old coins, it shelters the bones of the oldest Christian martyrs discovered in Europe.

Where: 50 miles west of Tulcea
Access: car (on DN22 between Luncavita - Jijila - Macin)

- Many streets in Istanbul and Marseille have been paved with granite extracted from the Macin Mountains.

- The Macin Mountains' gray granite was used in the construction of the Olympic Stadium in Munich,
where the 1972 Olympics were held.

400 million years ago, this mountain range stretched all the way to western Europe.
Its traces can still be found in Bohemia and the French Central Massif. Today, Tutuiatu Peak, the highest peak of the oldest mountain range in Romania, reaches just 1,495 ft.
More info:www.muntiimacin.ro/en/aria.php

The town of Babadag, known during Roman rule as Vicus Novium, was first documented in 1263. Between 1262 and 1264, some 12,000 Turks, led by Sara Saltuk Baba, settled around Babadag at the request of the Byzantine emperor, Michael III. Between 1677 and 1678, the residence of the Pasha of Silistra was established here to better observe troop movements of the Russians, with whom Turkey was at war.

The Museum of Oriental Art in Babadag is worth paying a visit. Its collections feature wooden, ivory and mother-of-pearl artifacts, religious items, daggers, tea services, a splendid bridal gown sewn with gold thread, Turkish dolls, Siraz, Sirme, and Anatolia carpets, and Kashmiri shawls said to have taken a quarter of a century to complete.

Other places of interest include the Ali-Gazi-Pasha Mosque, the oldest in Romania (1522), and the nearby Kalaigi spring, in which pilgrims from all over the Balkans come to bathe their feet. Visitors also can view the ruined tomb of Ali-Gazi-Pasha, who, long ago, was the terror of the region. It is said he possessed a harem of 800 captive women.

The name of the town comes from Baba (meaning father in Arabic) and Dagh (meaning mountain). Legend has it that a few centuries ago, there lived a shepherd called Korun Baba. One day, while leading his flock, he met some Turkish monks who asked him about Sari Saltuk's tomb. The shepherd answered that he knew nothing of this tomb, but that he had noticed his sheep avoiding a stone-covered place on the mountaintop. The monks started digging, and at sunset, found the bones of the saint. Upon that spot, the monks raised a mausoleum that still stands today. When the shepherd died, the locals buried him close to the Muslim saint. Legend has it that at the very place where the shepherd rested, the earth split in two, in order to mark the tomb.

A former Roman, then Byzantine and Genoese, fortress, Enisala, today, is a village stretching between Lakes Babadag and Razim. Here, you can visit a traditional fisherman's house converted into a museum displaying colorful tapestries and folk art.

About one mile north, overlooking Lake Razim, are the vestiges of the Heracleea citadel (Cetatea Heracleea), built by Genoese merchants in the late 13th century and conquered by Sultan Mehmet I in 1417 (he renamed it "o Yeni Sale"). By the 16th century, the citadel had been abandoned.

This is one of the Europe's prime bird-watching areas. You are likely to spot white-fronted and red-breasted geese, terns, waders, pelicans, herons and warblers.

A quaint fishing village, Jurilovca was established by Lipovani fishermen in the 18th century. At Capul Dolosman, to the east of Jurilovca, you can admire vestiges of a 6th century BC Greek colony, the oldest ancient habitat on Romanian territory, mentioned for the first time by Hecateus from Millet (6th -5th centuries BC).

Capul Dolosman is one of the strictly protected areas of the Biosphere Reserve. This is a popular spot for bird-watching, especially in November when thousands of red-breasted geese arrive from the Arctic Circle. Nearby, Lake Razim, once a bay on the Black Sea known as the Gulf of Halmyris, awaits exploration. A thin coastal strip of land protects the lake from the open waters.

In Jurilovca, you can rent a boat to take you to Gura Portitei (1 ½ hours away) on the shores of Lake Golovita. 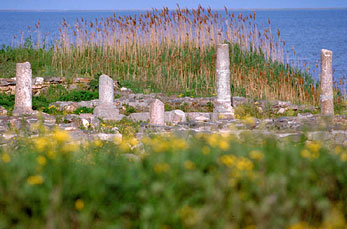 Heading south from Babadag towards Constanta, you'll pass through Istria. Four miles east of the village, on the shores of Lake Sinoe, is the ruined Greek-Roman city of Histria. Histria Fortress, the Pompeii of Romania, was the oldest Greek settlement in Romania. Founded in the 7th century BC by Greeks from Miletos, the richest city in Ionia (Asia Minor), this trading post soon became the main Greek port on the Black Sea. The city thrived for 14 centuries, prospering under Roman and Byzantine occupation, until invading forces wiped it off the map in the 7th century AD.

The lost city features remains of Aphrodite's Temple, the Temple of Zeus, Roman baths and other public buildings from the Roman-Byzantine period. The nearby museum (open: Tue. - Sun 9:00am - 8:00pm; Closed Mon.) houses a collection of coins, ceramic items and other vestiges of the great civilizations that thrived on the Black Sea coast, or Pontus Euxin, as it was called in ancient times.

Near Histria Fortress, you can visit one of the most beautiful lagoons in the country, Lake Sinoe, an extension of Lake Razim. The lake makes an excellent bird-watching site; 267 species have been recorded. The area is a stretch of marshy land and reedbeds between the freshwater Lake Nuntasi and the brackish lagoon of Lake Sinoe (the latter was open to the sea until 1960). Lake Razim is also popular for bird-watching, especially in November when thousands of red-breasted geese arrive from the Arctic.

Getting to Tulcea by air

Tulcea Cataloi Airport
Address: Sos. Tulcea - Constanta, Km. 15
Telephone: 0240 512.910
Email: office@aeroportul-tulcea.ro
www.aeroportul-tulcea.ro
There is no scheduled air service to Tulcea. However, the airport is open
for charter flights from/to any city in Romania.

Getting to Tulcea by Train

Tulcea Train Station
(Gara Tulcea Oras)
Address: Str. Portului 6
Tel: 0240 513.706
There are several daily trains from Bucharest and Constanta, via Medgidia.
Trains from/to other major cities in Romania connect in Bucharest.
The train station is located about half a mile from downtown Tulcea.

Getting to Tulcea by bus

The Tulcea bus terminal is located half a mile from the city centre, near the railway station and ferry terminal.

Getting to Tulcea by car

The fastest route from Bucharest to Tulcea is:
Bucharest - Urziceni - Slobozia - Harsova - Tulcea (E60 - Route 2A - Route 22A)

Distance from Tulcea to:

Navrom operates Danube Delta scheduled boat transportation
from Tulcea to Sfantu Gheorghe, Periprava and Sulina
as well as from Crisan to Caraorman and Mila 23.
Tickets are sold at Tulcea's Navrom terminal.

Transportation with private motor boats, rowboats and kayaks is available in Tulcea
as well as in many other villages in the Danube Delta.