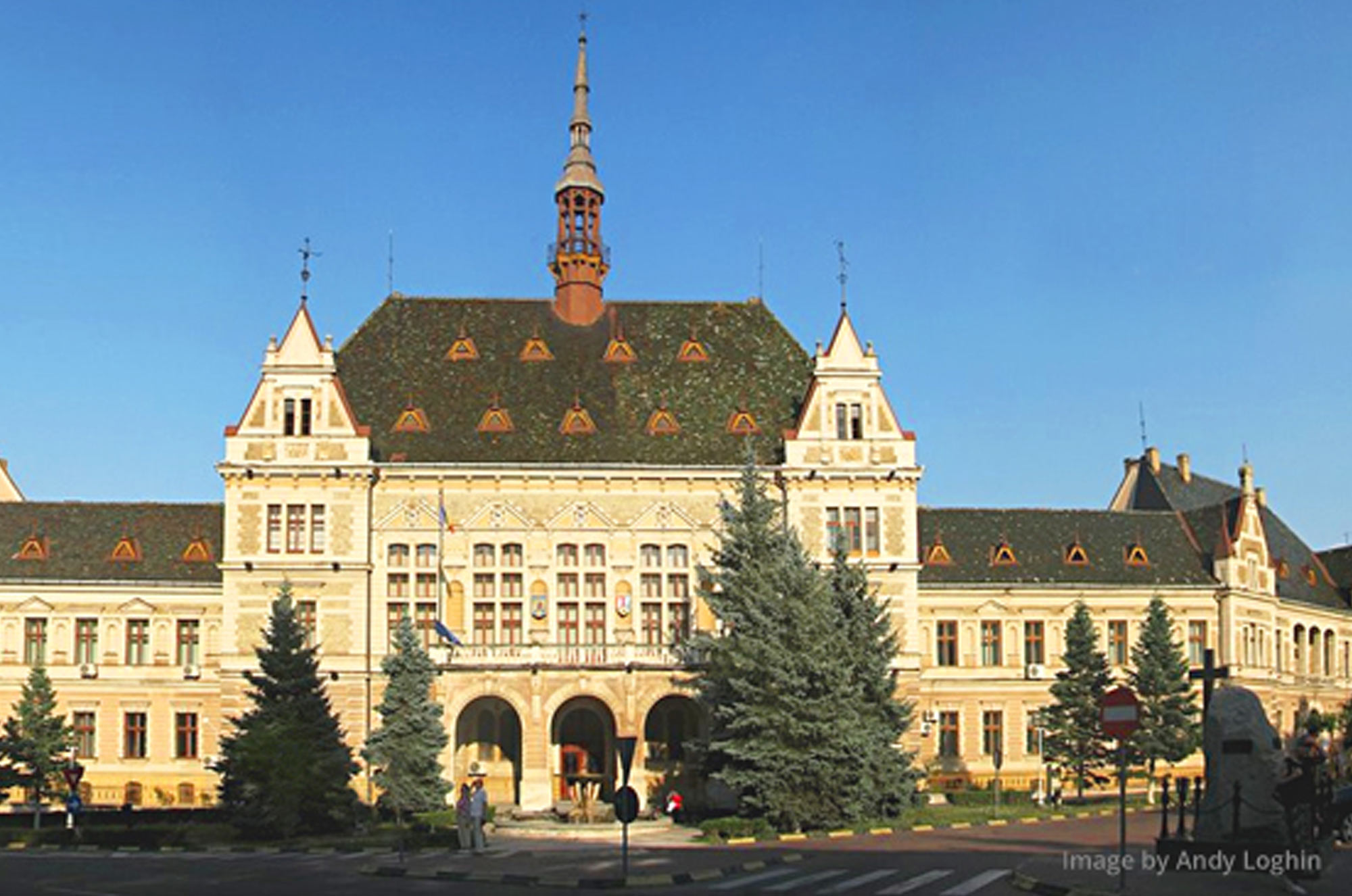 Deva is a large town in west – central Romania, set on the left bank of Mures River, not far from Romania's main coal and mineral mining area.

Numerous artifacts dating from the Bronze Age, found in the area, indicate that Deva region has been inhabited since at least 450 BC. The name Deva may have been given to the area by the leaders of the Roman Legion Augusta II who – in early 100s AD – has been transferred from Castrum Deva (Castra Devana) in Britania (today the city of Chester in England) to the newly conquered territory of Dacia / Transylvania.

Deva is – for the members of the Universal Unitarian Church – an important place of pilgrimage. Unitarianism traces its institutional roots to Transylvania, where Unitarianism has flourished since the 1500s. The ruins of Deva fortress contain the prison where Francis Davíd (Ferenc Dávid) - the Unitarian founder of Europe's first official declaration of religious toleration - died in 1579.

Rising some 1,000 ft. on a rocky hill-top (Dealul Cetatii), Deva fortress - the symbol of the town - had witnessed, since 1269, the town's long history and countless visitors. For centuries the fortress (nicknamed "the Key to Mures River") has guarded the access, from the western regions of Banat and Crisana and from Central Europe, to Transylvania.

The fortress is open daily and admission is free. The climb to the fortress is a 45-minute walk on a reasonable path. Those who cannot or do not wish to walk to the citadel can use the funicular to reach nearly to the top. One must still navigate a series of steps to enter the ruins of the fortress and view the memorial to Francis David.

His statement "We need not think alike to love alike" still inspires many today.

From the top of Dealul Cetatii hill visitors can view the route of the "Salt Road" the old Roman that – from the early 100s AD until late 200s AD - used to connect Rome, the capital of the Roman Empire, with Transylvania.

At the foot of the Fortress Hill (Dealul Cetatii) lies the Magna Curia Palace, a Renaissance style structure built in 1621. Subsequent modifications, last one in 1746, added numerous Baroque elements that gave the final shape that can be seen today.

The palace is now home to the Museum of Dacian and Roman Civilizations.

Built in mid 1800s, the "Art Theater" is Deva's fines example of Secession Viennese architecture and the city's main cultural institution. The building was opened as a theater in 1911 after extensive renovations based on plans by Jewish architect Marcell Komor whose other major works include Targu Mures Municipality Building (Romania), Reduta concert hall in Bratislava (Slovakia) and Subotica synagogue (Serbia).

Built in 1861 the massive cathedral features beautiful Roman-Byzantine (interior) frescoes; the exterior is adorned with base-reliefs. Twenty-one crosses are placed on the roof of the structure.

A bronze statue is dedicated to the king of Dacia: Decebalus (Decebal) who ruled the Dacians between AD 87 and 106. The kingdom of Dacia stretched between the rivers Tisa, Danube, upper Dniester and Siret (a significant part of the territory of today's Romania). Decebalus translates into "strong as ten men". Decebalus fought several wars against the Roman Empire; his army was defeated in 106 AD by the Roman legions of Emperor Trajan and the king of Dacia committed suicide to avoid capture.

The statue of Roman Emperor Trajan stands in front of Deva town hall. To increase the glory of his reign, restore the finances of Rome, and end a treaty with Dacia perceived as humiliating, Trajan resolved on the conquest of Dacia, the capture of the famous Treasure of Decebalus, and control over the Dacian gold mines of Transylvania. The result of his first campaign (101–102) was the siege of the Dacian capital Sarmizegethusa and the occupation of part of the Dacia. Emperor Trajan recommenced hostilities against Dacia and in 105 AD and in 106 gained control over a significant part of Dacia's territory.

To commemorate Emperor Trajan's victory against the Dacians, the Roman Senate commissioned the construction of a monument: a freestanding column (Trajan's Column) famous for its spiral bas relief, which artistically describes the epic wars between the Romans and Dacians (101–102 and 105–106). Its design has inspired numerous victory columns, both ancient and modern.

Museum of Dacian and Roman Civilizations

Due to its spectacular architecture, Corvin Castle has been the setting of numerous film productions and TV advertisements.

Simeria – Transylvania is home to Europes's third largest Arboretum. The 180-acres park, located on the left bank of Mures River, was created in the early eighteenth century and, intensively developed since 1953 by the local Forest Research Agency. It is believed to be the oldest, the most valuable and picturesque collection of exotic and native trees and shrubs in Romania.

The native vegetation: riparian forests, fragments of an ancient elm forest and rare oaks forest are complemented by 2,165 diverse species of (exotic) plants and rare trees brought from all over the world.

Plant enthusiast, birders, walkers and anyone who enjoys nature and fresh air can spend several hours or even a whole day at Simeria Arboretum to relax and enjoy the diverse landscapes that include lakes and streams and walking paths.

Between 1909 and 1912, Romanian engineer and airplane pilot Aurel Vlaicu has designed and built three self-powered airplanes featuring one central aluminum tubing, flight controls (in front) two propellers (Gnome rotary engines, one mounted ahead of the nacelle, and the other to the rear of the wing) and a tricycle-landing gear with independent trailing arm suspension and brakes on the rear wheel.

Romania's 50 Lei banknote, currently in use, has a portrait of Vlaicu on the obverse, and on the reverse a drawing of one of his airplanes and a cross-section of the airplane's engine.

Ulpia Traiana Augusta Dacica Sarmizegetusa was the first city founded in Dacia by Emperor Trajan and the political, administrative and religious centre of Roman Dacia in the 2nd and 3rd centuries. The city was destroyed by the Goths; today Ulpia Traiana remains in ruins, with a partly preserved forum, an Amphitheater, and remnants of several temples.

Distance from Deva to:

The train station is located less than 0.5 miles from downtown Deva.

There are direct trains from./ to Deva to/ from Romania's main cities
as well as international service from/to Budapest (Hungary).

For the list of international trains with service to/from Romania please visit: www.RomaniaTourism.com/Transportation.html#ByTrain