Located just 20-minutes from the border with Hungary, Satu Mare is the gateway to rural Maramures for travelers coming from Central and Western Europe. Archaeological evidence shows settlements in the area dating to the Stone Age and the Bronze Age; there is also proof that the Geto-Dacian communities continued to inhabit this region after the Roman conquest in 105-106 A.D.. The city was first mentioned in 1181 as Castrum Zotmar, a fortified stronghold from which the town derives its name. 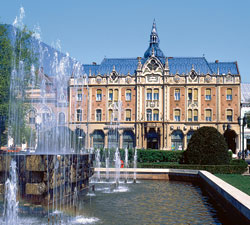 In 1543, the Báthory family took possession of the citadel, proceeding to divert the Somes' waters in order to defend the southern part of the fortress; thus, the fortress remained on an island linked to the main roads by three bridges over the Somes River. In 1562 the citadel was besieged by Ottoman armies. Later it was besieged by the Habsburgs and set on fire. The Austrian general Lazar Schwendi ordered the citadel to be rebuilt after the plans of Italian architect Ottavio Baldigara; using an Italian system of fortifications, the new structure would be pentagonal with five towers. During the Middle Ages, Satu Mare and Mintiu were two distinct entities, but between 1712 and 1715 the two gradually united under one administration. On 2 January 1721 Emperor Charles VI recognized the union, at the same time granting Satu Mare the status of free royal city.

Satu Mare has a tradition in fencing dating to 1885, being the European city that has supplied the most world and Olympic champions.

The 18th century marked the beginning of an intense urbanization process of Satu Mare, some of the main attractions in the city dating from this period: the old city hall, the military barracks, the Catholic and Reformed churches. The first park was established in 1844.
During the early 1800s, the first large industrial companies were founded: the steam mill, the brick factory, the Neuschloss wood-processing factory, the lumber factory.
Located at the crossroads of commercial routes, Satu Mare became an important railway center.
The railway to Carei was built in 1871, the one to Sighet in 1872, and the one to Baia Mare in 1894.

The old town, which stretches north of the river Somes, contains some of the major attractions in the city. Unfortunately, during the reign of Ceausescu, a large part of the historic district was destroyed.
Traian Boulevard (Bulevardul Traian) leads right to the central Piata Libertatii (Freedom Square). Around the square, you will find several churches, museums and hotels. 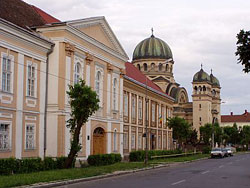 On '1 Decembrie 1918' street you will find the large Orthodox Church of the Archangels Gabriel & Michael. Other buildings on the same street show some of the old glamour of Satu Mare. In the centre, facing the eastern part of Piata Libertatii, you will notice the large domes of the Roman-Catholic Cathedral. The church was built around the year 1800, but it was heavily damaged during the Second World War. The shape is rather unusual and the dimensions inside are impressive. North of the centre there's the small and nice Piata Pacii (Peace Square). Right in the middle of this square stands the small 19th century Hungarian Reformed Church, also known as the Church with Chains (Biserica cu Lanturi), one of the oldest churches in the city. Built between 1793 and 1802, the church has a valuable collection of plates, disks and glasses dating from 1657-1679, as well as the oldest bell in Satu Mare, dating to 1633. The furniture inside the church was made between 1799-1807, from oak, by a master craftsman named Frits Iosif. 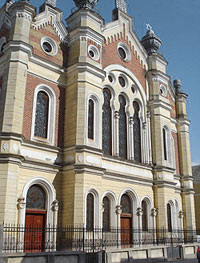 During the 19th and 20th centuries Satu Mare was the seat of the Teitelbaum and Gruenwald Hasidic Jews, who lived there until World War II and now reside in New York City, Jerusalem, London, and other places.

Jews first settled in this northwestern Romanian town, bordering Maramures County, around 1700. During the 19th and 20th centuries, the population grew, reaching, before World War II, approximately 13,000 .
In early 1940s, the community was served by some eight synagogues, a yeshiva, and a Hebrew painting house. In May 1944, the Nazis deported most of the local Jewish population to death camps. A memorial to the 18,000 Jews from around Satu Mare murdered in the Holocaust stands between the two remaining synagogues. Tombstones in the Orthodox Jewish Cemetery (address: Str. 9 Mai) still show bullet holes and damage from World War II.

Nearby there is also a Neolog Cemetery.

Address: Str. Decebal 4 - 6
Built in 1890s, in similar design to the synagogue in Oradea, it remained closed for decades until the community reopened it as a concert hall and cultural venue.

Address: Str. Decebal 4 - 6
Built in the 1920 and located next to the Great Synagogue, it is the only remaining working synagogue.
A small prayer room is used for regular services.

When: 1st Sunday in May
Where: Huta Certeze (36 miles northeast of Satu Mare)
Access: car, bus

Each spring village people and farmers in the Oas region gather on a hillside overlooking Huta-Certeze to celebrate "Sambra Oilor". This centuries-old traditional festival marks the time of the year when shepherds leave for the mountains with their sheep. To help them get through the lonely months ahead of them, they celebrate one last time with folk music, dances and a rich meal. Since 1970 the event is complemented by a major folk festival.

A compilation of Romania’s main events is available at
www.RomaniaTourism.com/Festivals-Events 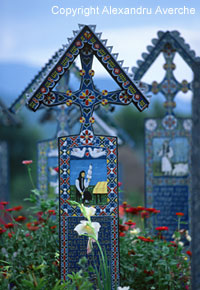 The wooden Churches of Maramures

The city of Baia Mare

Airlines with service to Satu Mare:

Distance from Satu Mare to:

For a list of available accommodations in Satu Mare, please check our Satu Mare Hotel List
or our on-line Accommodation Guide.