Home About Romania Romania in the Press Article: Welcome to Transylvania 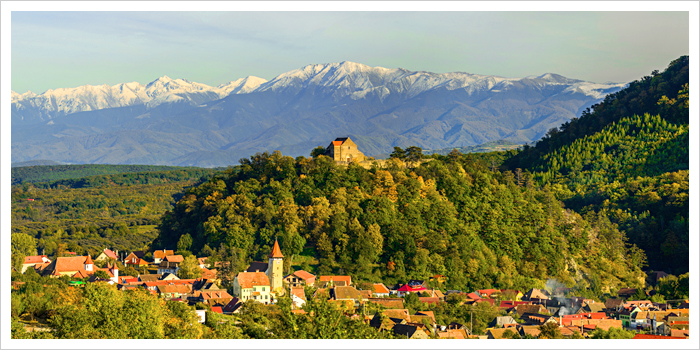 By Guy Trebay ( Travel and Leisure )

We were haring across the countryside, to swipe a phrase from Renata Adler's novel Pitch Dark, traveling cross-country along back roads threaded through rows of sentinel beech trees, past dromedary hillsides and fields whose freshly furrowed soil was so deliciously black and loamy you were tempted to leap out of the car and scoop up a bowl. Some friends and I were headed into Transylvania, a little-visited swath of continental Europe in the shadow of the Carpathian Mountains, terra incognita except, of course, as a fantasy place familiar to the legions of readers and moviegoers who make the obvious instant association with the invincible Prince of Darkness and box-office ka-ching!: Dracula. 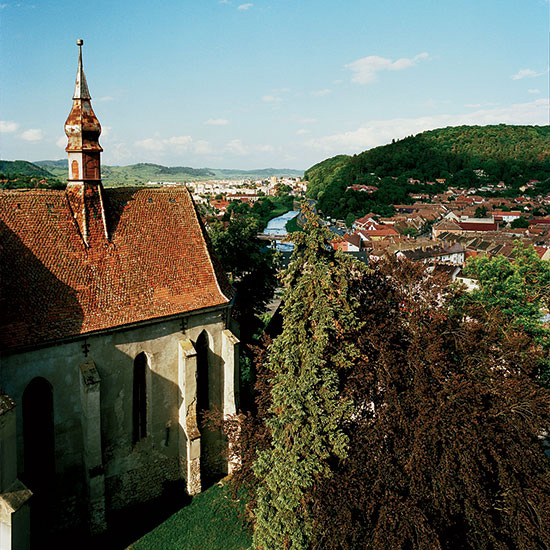 Talk about the undead! Not garlic or holy water or well-aimed stake can stop this revenant's franchises—Twilight, True Blood, the eroto-gothic Vampire Lestat. But forget Dracula. The residents of Transylvania certainly have. Except at his alleged birthplace and an unimpressive castle where the Muntenian prince who provided a historical armature for Bram Stoker's 1897 novel occasionally sojourned, hardly anyone there spares much thought for the midnight creeper. It's no cinch even finding the kitsch souvenir mugs depicting him with blood dripping from his ceramic fangs. I tried.

There is another Transylvania. Back and back I have returned to it, as though ineluctably, and lucky in every case. For my first time I arrived in the dead of a bone-chilling winter to report on a violent revolution. Sneaking a rented car illegally across the border from Hungary in 1989, a photographer colleague and I drove hundreds of miles through snowy monochrome landscapes so little altered by the incursions of industrial modernity we might as well have been figures in a faded kinescope.

Oddly well-paved highways stretched empty for miles before us. Though the Soviets kept their puppet states in abject conditions they, like every other conqueror to roll across this crucial bulwark linking Europe east and west, were fastidious about their roads. Instead of the expected tanks, we saw just the occasional cart hitched to stout draft horses, at the reins a farmer wearing a cloak of unshorn sheepskin and with a puppet-size trilby perched on his head. Steam from the horses' labored exhalations hung in the air like plumes of crystal. We barreled onward in search of the brave revolutionary dissenter Lázsló Tõkés, somewhere north of the city of Timișoara. We did eventually find him, holed up in a wooden church in the high Carpathians. What survives from that trip, though, is not a journalistic milestone but haunting recollections of the beauty of a region to which I vowed always to return. 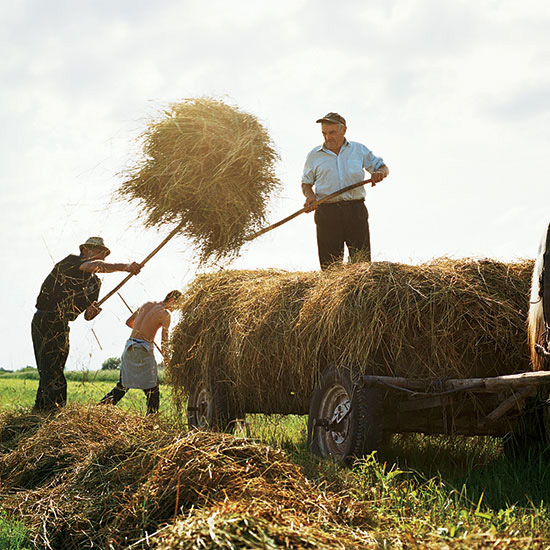 Romania is a democracy now, albeit one run by leftover apparatchiks, and a remarkably easy place in which to strike out on itineraries that carry one over routes first traversed by the Dacians and thereafter by the Romans, Goths, Gepidae, Huns, Avars, Bulgars, Pechenegs, Magyars, and Saxons. On each of two successive trips there, I pointed myself toward the so-called Seven Cities, settlements established by a Saxon minority under an ancient agreement with Romania's Hungarian conquerors. Starting around the 12th century the Saxons built a series of what amounted to landlocked and fortified islands in the form of soberly refined cities like Sibiu, Sighișoara, and Alba Iulia, each linked to the others throughout the deeply pastoral landscape by scores of similarly structured villages.

Each, like an Escher drawing, has its own citadel church and perimeter palisade, each its characteristic concentric interior whorls of tidy dwellings. With rare exception, each still contains some little-known marvel—the Lutheran cathedral at Biertan, designated a World Heritage site as much for its squared-off toy-Gothic architecture as for its multi-panel altarpiece; the massive Black Church at Brașov, raided, torched, and sacked by everyone from the Mongols to the Ottomans and still towering reassuringly over the broad town square; the tiled Baroque clock tower at Sighișoara; the rows of symmetrical 18th-century houses at Viscri.

Whatever the real figures, the poetic desuetude of Transylvania's churches and villages is a fragile state of affairs. Inspired by recent alterations in land-ownership laws, speculators and developers from Western Europe have already begun staking claims on the country with the expectation that one day it will be to Germany as Tuscany is to Great Britain—Draculashire. Some of the canniest early adopters have taken a lead from Prince Charles, not only a regular visitor but also a Transylvanian householder. In a variety of YouTube videos with soft-focus atmospherics the conservationist heir to the British throne can be seen waxing rhapsodic about the region's rare abundance of flora and fauna. The point holds.

Owing largely to traditional farming practices, Transylvania preserves an ancient and man-made biosphere that sustains cultivation and managed wildness in rare harmony. Once, bucolic views like those you routinely encounter in Transylvania must have been commonplace across great expanses of preindustrial Europe, but no more. There the surviving populations of bear and wolf and lynx and roebuck and boar are said to be the greatest in what remains of the European wild.

Setting out from either of Prince Charles's two modest houses in the villages of Viscri and Zalánpatak, with its dirt lanes and communal cattle trough carved from a single log, a traveler can hike almost limitlessly across lands unfenced to the far horizon. Uniquely in a world of tightly gridded personal patches, the pasturelands in Transylvania are communally held. It was not altogether disappointing on my wanderings to encounter nothing particularly fanged or furry. Because the timing of my trips happened to coincide with the seasonal movement of flocks first up to and later down from their montane grazing lands, everywhere I went I was greeted by orchestral bleating as over some hill came a fleece tsunami.

Darting and nipping about were the neurotically busybody sheepdogs, by their snarls discouraging a hiker from mistaking them for Lassie. Following inevitably behind would come some laconic shepherd—sun-grooved face, crook in his arm, funny felt topper perched on his head and looking just like a character from Grimm's might if people in fairy tales smoked.

Ethnic segregation was the signifying feature of a nearly 1,000-year Saxon occupation. From inside their hivelike citadels, the fair-haired occupiers monopolized and refined the lucrative guild trades, the important crafts, and all the learning. Densely built and largely vertical, the Saxon cities read like a series of unusually harmonious essays on theme and variation. I wandered from the Black Church at Brașov, where hung in the nave is the most extensive collection of Turkish prayer rugs in the world, to the citadel church in the hamlet of Mălâncrav, with its 14th-century biblical fresco cycle, and from there to the Saxon powerhouse city of Sibiu, where, arrayed around the Piata Mare, or main square, a series of handsome buildings marks the timing of each successive wave of wealth creation like epochal tidemarks.

The Museum of History there is set in a medieval building that once was a private house and also a town hall first erected in 1549. The squat, sturdy tower called the Turnul Scarilor dates back to the 13th century. A pastel Baroque confection containing the Brukenthal Museum is a newcomer, having been built in the late 1700's; its nearby sister institution, the Museum of Pharmacy, is located in a 1569 building where one of the oldest pharmacies in present-day Romania was once located. In the basement of that house the physician Samuel Hahnemann is said to have invented homeopathy. His theory of coffee as the root cause of most common diseases did not hold up. Yet we have him to thank that no one treats headaches anymore by letting blood.

The time-travel effect of crossing the Piata Mare in Sibiu; of strolling the lanes of 19th-century villages where traffic stops at noon for the daily goose-crossing; of driving back roads or hiking the Transylvanian hillsides is both amplified and rendered particularly poignant when you learn of the massive exodus that occurred soon after Ceaușescu fell. The expulsions and ethnic erasure that a variety of brutal regimes never quite managed to accomplish happened almost overnight in the 1980's and 90's when a German prime minister invited Transylvania's Saxons home to the Fatherland. "The exodus was heartbreaking, really, " said Jessica Douglas-Home, British-born chair of the preservationist Mihai Eminescu Trust, referring to the disappearance of an 800-year-old community once spread across 266 cities and small towns. "Everything collapsed. Everyone fled." 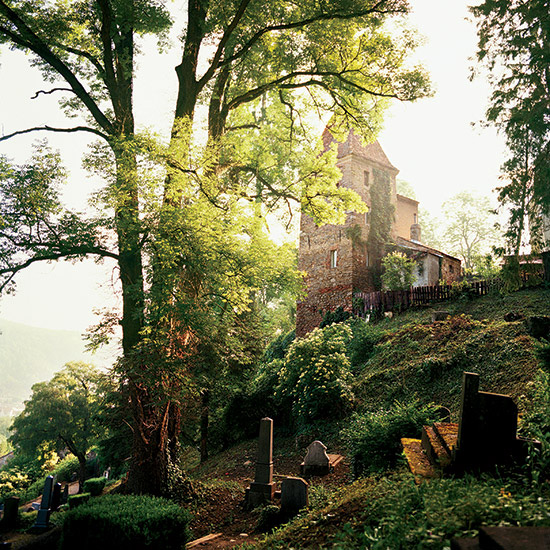 The nonprofit Eminescu Trust operates Apafi Manor, a finely restored Neoclassical villa that once served as the country seat of a family of minor Hungarian nobles. Set amid acres of an organic apple orchard, furnished with impressive restraint and using mainly local materials by the English decorator David Mlinaric—friend and advisor to Prince Charles—the 17th-century manor now accommodates small groups of paying guests. Following the advice of Douglas-Home I trekked from village to village, Mălâncrav to Viscri, on old cart roads and sheep paths through what she, with justification, termed "an extraordinary folding hillscape of forests, little settlements with terra-cotta roofs, and communal grazing grounds."

Across a golden autumn landscape I made my way, coming occasionally into a hamlet where on a roadside stand a farmer like Ionel Mihala had laid out for sale trays of mushrooms or forest berries or wild mint honey. The pale blue skies were combed with shreds of cirrus; a chill presaging winter crept into the air.

To say I did nothing much is not to suggest the days were eventless. Like all culture-hungry travelers I ate with my eyes and duly recorded and uploaded my observations in notebooks and on the iCloud. Yet when I review those notes and images now it is not the data that impresses so much as a palpable current of recollected feeling. Roaming the fields and across hilltops I experienced a movement, too, away from neurotic modernity and into a genuinely old time, one where a delicate balance between man and nature seemed to hold. It was no challenge to comprehend why the elderly Saxons left behind by the exodus were sometimes to be found weeping on doorsteps, grieving no doubt for something fine that, once lost, can never be retrieved.

Guy Trebay is a reporter for the New York Times.