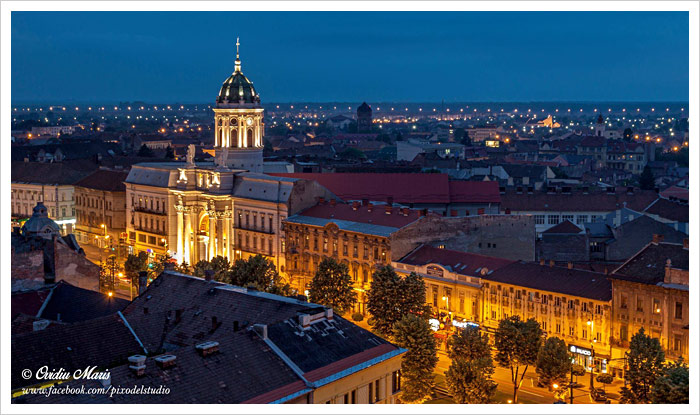 The unique mix of architectural and cultural heritages in the history-rich provinces of Crisana and Banat stems from the fact that for centuries Romanians have lived here alongside Germans (Swabs or Schwaben), Serbians and Hungarians.
The three main cities in western Romania: Timisoara, Oradea and Arad are offering visitors an insight into the regions of Banat and Crisana long history and colorful traditions.

The Habsburg rule (early 18th century until 1918) introduced the Art Nouveau architecture in Banat. " Frequently referred to as "Little Vienna," Timisoara has always been a progressive, cosmopolitan city. An important trade and university town, Timisoara features open squares, parks and gardens, elegant boutiques, cafes, restaurants and a great display of Secessionist architecture. Cultural attractions include the Banat Museum (art, natural history and ethnography) the Village Museum, the Botanical Garden, the Timisoara Philharmonic and the Opera House. Places of historical note include the Ruins of Timisoara Fortress, Huniade Castle, Dicasterial Palace, Old City Hall and the Palace of Justice.

Just north of Timisoara on the Mures River banks lies the city of Arad, tracing its history back to the 12th century. Churches and cathedrals span four centuries, several denominations and architectural styles ranging from baroque to neoclassic. The exciting architecture of the buildings in the city's square reflects the influence of the one-time Austrian-Hungarian occupation; most notable are the City Hall and Cenad Palace. An original Turkish fortress (built in 1550 and rebuilt twice in the 17th and 18th centuries), the Palace of Culture and the State Philharmonic House are some of the other sights to enjoy here.

Oradea, eight miles east of the Romanian-Hungarian border, is one of the most picturesque towns of western Romania, as well as an important cultural center. At the turn of the last century, most of the town's old houses were rebuilt and customized to the then trendy architectural style from Vienna called "Sezession," with its richly decorated facades of pale pink, green, blue and white. To get a feel for the city's past, stroll around the Old Downtown and visit the Museum of the Cris Rivers, housed in a splendid 1770 baroque palace with 365 windows modeled after the Belvedere Palace in Vienna.

Western Romania is a heaven for active travelers and adventure seekers, with abundant opportunities for trekking, mountain climbing, hunting, fishing, horseback riding and more. Crisana and Banat have exquisite natural scenery with a climate similar to that of the Mediterranean region.

Baile Herculane, within driving distance of Timisoara, is an ancient Roman spa, developed in the 19th century as a fashionable resort. Legend has it that Hercules himself bathed in the strength-giving natural springs. Mount Domogled, to the west of the resort, is an extensive forest reservation sheltering rare trees, turtles and butterflies.

The Bihor Mountains, descending from east to west, hold some of the best-hidden treasures of Romania; explore the cave tunnels, underground waterfalls, hidden lakes, canyons and glaciers. West of the Bihor Mountains is Bears' Cave. Named after fossil traces of the cave bear species (extinct 15,000 years ago) discovered here, it features two levels of galleries, extending more than a half-mile with stalactites and stalagmites estimated to be 22,000 years old, some resembling animal and castles shapes.

The Secession architectural style - an important link between the Byzantine style and the later modernist architecture - in Arad, Oradea and Timisoara

The ancient spas of Hercules at Baile Herculane

The Bears' Cave (Pestera Ursilor) near the village of Chiscau, a cave of rare beauty, hosting a vast range of stalagmites and stalactites as well as fossil traces of the cave bear species extinct 15,000 years ago

The Wind Cave, the longest cave in Romania (more than 24 miles)

The Iron Gates of the Danube (Portile de Fier), the narrow Danube gorge between the Carpathian & Balkan Mountains

The Nera Gorges (35 km from Oravita)

Main Museums in Banat and Crisana

The local cuisine of Banat, displaying Austrian, German and Hungarian influences, is based mainly on pork and on richly spiced vegetables. Sour cream, thyme, tarragon, cumin and hot paprika are favored to spice up the dishes. A local specialty is homemade noodles, called Iofca – prepared with cabbage or cheese, nuts, milk and poppy seeds. Another traditional dish in the Banat region is paprikash with dumplings made out of flour and egg dough boiled in salt water. Other local dishes include stew with dumplings, peas and fried eggs, chicken and pork goulash, giblet soup, and tarragon chicken stew.

Other local specialties:
Varga Beles – a tasty specialty homemade noodle pudding with cheese and raisins wrapped in a pie puff and baked in the oven.
Pogacele - traditional cakes usually with plum brandy.

The first records of viticulture in the Banat and Transylvania regions date back from the period of the Roman invasion of Dacia, in the first century AD. Within the walls of the medieval citadel of Alba Iulia a network of inter-connected cellars were discovered; they were once used for production of sparkling wine and for storage and aging of still wines.

The vineyards of Arad stretch on the hills bordering the western part of the Zarand Mountains, between Lipova and Pancota. Star of the region is the vineyard of Minis. In 1862, at a wine competition in London, "Rosu de Minis" has won the Best of all Wines Award. For more than one century the wines of Minis have been exported to several countries in Europe as well as to the United States of America.

The red, native variety Cadarca, displaying a ruby-red color with a stinging taste of fresh clove, was the wine of the imperial court of Vienna during the reign of Emperor Franz Josef, in the 18th century.

Winetasting / Wineries in Banat and Crisana

Travel to Banat and Crisana by train or bus

There are several daily trains and buses from/to Bucharest and other major cities in Romania to Banat and Crisana regions.

Information on international trains to/from Banat and Crisana are available at:
www.romaniatourism.com/transportation.html#bytrain