Built in 1310. on the site of a former 12th century wooden fortress, burned by the Tartars in 1241, Fagaras was enlarged between the 15th and 17th centuries when it was considered one of the strongest fortifications in Transylvania. The fortress was surrounded by a deep moat which, in times of war or social unrest, could easily be filled with water from a nearby mountain brook. A bridge over the moat provided the only access point. The fortress boasts strong defending walss and five watch towers.

In 1948, Fagaras Fortress was taken over by the communists and functioned as a political prison until early 1960's when it was turned into a museum. 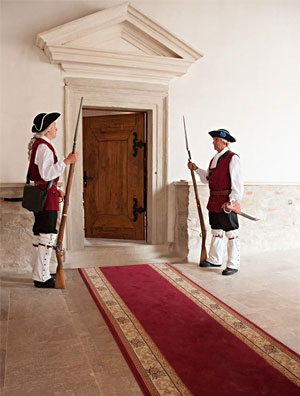 Throughout the years, Fagaras Fortress functioned mainly as a residence for various princes and their families. Transylvanian Prince Gabriel Bethlen (1613-1629), strongly influenced by the Italian Renaissance, brought architects and glassmakers from Italy who rebuilt the fortress, bestowing elegance and beauty to the construction.
During the rule of Georg Rákóczi (1630-1649), the castle's fortifications were doubled and the moat was enlarged. Ráckózi had the bastions bridged and covered, the moat paved with stone, the drawing-bridge and the casemates repaired. A a guardhouse was, also, built.

Records show that, in the 17th century, the interior must have been quite luxurious; unfortunately, little of the former grandeur has been preserved. The castle was deprived of its original decorations and furniture when it was turned into a military garrison, in the 18th century.

Today, the beautifully preserved fortress houses the Fagaras County Museum. Roman artifacts, a collection of medieval weapons and traditional folk crafts as well as a beautiful collection of icons, painted on glass are, are on display.