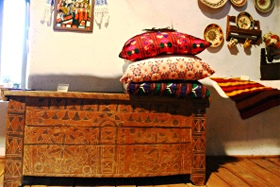 Built in the 13th century by Count Chyl de Kelling, the Fortified Church at Calnic (German: Kelling) is one of the most imposing defensive structures in Transylvania. First documented in 1269, the fortress served as a residence for Saxon nobility until 1430, when it was sold to the peasant community of Calnic.

Enclosed by one and a half rings of high walls fortified with a defensive tower to the south and a gate tower to the north, the fortress withstood several Ottoman sieges. Its defense system was completed in the 16th century when a small Romanesque chapel, surrounding walls and a water ditch were added by the Calnic community.

The five-story-high Siegfried Tower, the landmark of the fortress, is endowed with defensive corridors and firing windows. An on-site medieval art museum displays various artifacts.

Two of the former food-storage rooms of the fortress have been transformed in guest rooms.
Each room has three beds and share one bath.
Visitors interested to expplore the area and spend one or more nights at Calnic fortress
can book their stay by E-mail or telephone: (+4) 0258 747 220