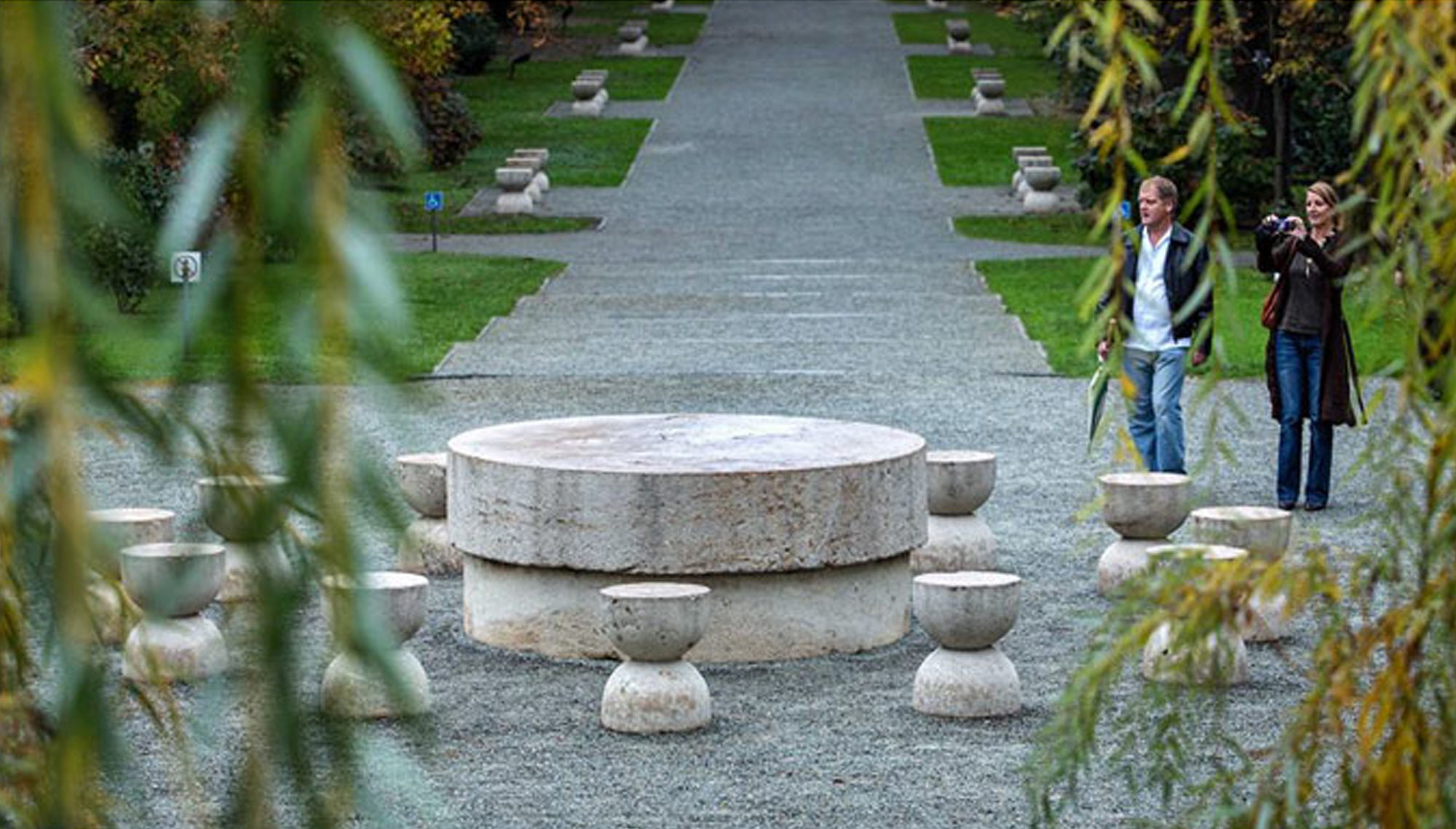 A former Roman settlement, the city of Targu Jiu lies at the foothills of the Carpathian Mountains, on the banks of the river Jiu. Inhabited since Paleolithic times, the region of western Oltenia was of strategic importance to the Romans. The area provided direct access, through one of the most spectacular passes in the Carpathians, to present-day Transylvania, the heart of the former Dacian Kingdom.

Constantin Brancusi, one of the most influential modern sculptors of the 20th century, was born near Targu Jiu, in Hobita. Although he lived and worked for most of his life in Paris, his legacy is also preserved in Romania, in the city of Targu Jiu.

The Jiu River valley was the scene of heavy fighting during World War I and World War II. Here, in a monumental ensemble, Brancusi created three sculptures as a memorial to the 8,500 Romanian soldiers who died defending the Jiu Valley from the advancing German army. The three sculptures, the Silence Table (Masa Tacerii), the Kiss Gate (Poarta Sarutului) and the Endless Column (Coloana Infinitului), are placed on mile-long (1.5 km) east-west axis that runs through the heart of the city.

Table of Silence, made from limestone, features twelve chairs, originally placed much closer to the table and arranged in pairs.

The gate of the Kiss, made out of marble, features a kiss motif on the gate pillars. The entire structure is supported on a steel axle.

Targu Jiu is also the capital of Gorj County, a region of rolling meadows, grassy hills and mountain scenery with plenty of natural and cultural attractions to explore. Tiny towns and villages dot the county, and contain some marvelous traditional architecture. Several spa towns and monasteries high in the mountains make for popular excursions.

Here visitors can see photographs of Brancusi's life along with artworks by other Romanian modern artists.

Set up in 1894, it is considered to be the first county museum in Romania. On display are colorful examples of Oltenian folk art.

Built in 1884 by the Teodoroiu family, the house is dedicated to the memory of the young Ecaterina Teodoroiu, the Romanian World War I heroine who disguised herself as a man so she could fight alongside her fellow soldiers.

Born in 1894, Ecaterina Teodoroiu graduated from the Girls' School in Bucharest and was soon to become a teacher at the time when Romania entered World War I. In October 1916, Ecaterina joined the Romanian Army and fought the River Jiu battle in which Romania's 1st Army resisted the 9th German Army offensive.

She had initially worked as a nurse but subsequently decided to become a front-line soldier, after the death of her brother Nicolae (Sergeant in the Romanian Army). It was an unusual decision for a woman to be fighting in battles and she was sent to the front reluctantly. However, soon she proved her worthiness as a soldier. By November she was taken prisoner but managed to escape. After hospitalization, she came back to the front where she was soon decorated, advanced in rank to Sublocotenent (Second Lieutenant) and given the command of a 25-man platoon. She was later awarded the Military Virtue Medal for bravery.

On September 3, 1917, she was killed in the Battle of Marasesti. According to some accounts, her last words before dying were: "Forward, men, I'm still with you!"

Mihai Topescu, a gifted glass artist, listed in the Who's Who in Contemporary Glass Art guide, welcomes visitors to his workshop to watch him and his team create artistic and decorative glassware.

Attractions not far from Targu Jiu

Curtisoara is home to an interesting open-air museum, featuring a collection of barns, wine stores, mills and houses enclosing an 18th Century cula  - a traditional manor house with a one-story design popular in this area,  and a church dating from 1820.

Built in 1760 the Cartianu Manor (Cula Cartianu) is a fine example of traditional southern Romania architecture that combines stone and brick masonry with large wood beams. The manor is also home to a unique exhibit of traditional costumes, textiles and accessories.

The house in which sculptor Constantin Brancusi was born, in 1876, and spent his childhood now welcomes visitors.
It preserves the original architecture, furniture and other household items. Influences of the aesthetics of peasant life in south-western Romania (Oltenia) can be identified in some of artist's works.

Dating from 1375, Tismana is one of the oldest monasteries in Romania. Today the monks are continuing the Oltenian carpet weaving and glass icon painting traditions.

Nature enthusiasts will enjoy the area's gorges, caves, springs and spectacular columns carved in the steep walls of the mountain.

Located on the road leading from Targu Jiu to Curtea de Arges  Horezu Monastery, founded in 1690 by Prince Constantine Brancoveanu, is the largest monastic settlement in Walachia,. A masterpiece of the Brancovenesti style and a UNESCO World Heritage site, Horezu is renowned for the richness of its sculptural detail, the treatment of its religious compositions and its painted decorative works. The monastery houses precious collections of frescoes and icons dating from the end of the 17th century and the beginning of the 18th century.
The nearby village of Horezu is home to one of the biggest pottery centres in Romania. Nearly a century ago, local nuns taught the villagers how to make and paint pottery, and ever since, people have come from far and wide to get their hands on Horezu's ceramic.
Note: Overnight accommodation is available. Please contact the monastery for reservations.

In Curtea de Arges, visit the 14th-century PrincelyCourt and the Princely Church, with its lovely interior frescoes. According to tradition, Curtea de Arges was founded in the early 14th century by Prince Radu Negru. The town succeeded Campulung as the capital of Walachia, hence its name Curtea (The Court). Another stunning architectural gem is the 16th century Curtea de Arges Monastery (Manastirea Curtea de Arges), toppled with two towers spiraling in opposite directions. Behold the sad legend of Manole as you take in its beauty. Romania's first two kings and queens are buried here.

Distance from Targu Jiu to:

The local public transport of Targu Jiu consists of nine bus routes.
A ticket for one travel costs the equivalent of $0.50.

There are several pharmacies (Farmacie) open 24 hours a day in the city.