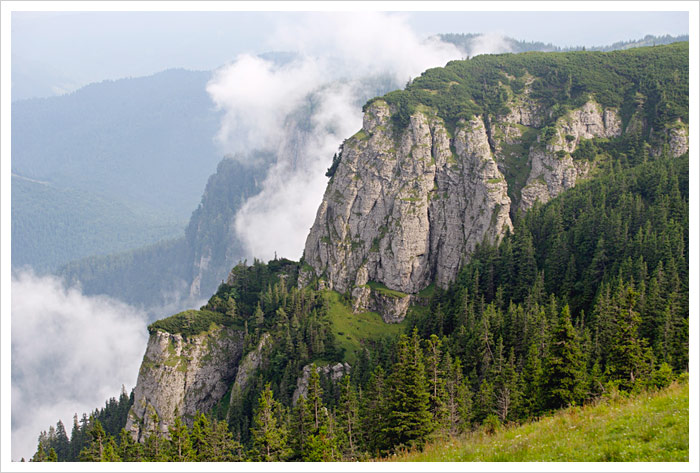 Surrounded by watercourses and dam lakes, Ceahlau Mountain, the Olympus of Romania, displays an incredible concentration of flora - over 2,000 flower species, and wildlife. Fossil limestone, the rock formations Dochia, Cusma Dorobantului, and the Duruitoarea waterfall are just some of the main attractions in the park. The park is bounded to the east by the Bistrita River and Lake Bicaz, and to the south by the Bicaz River.

Some of the most exciting Romanian legends refer to the strange stone shapes spread around the peaks in the park. The Dochia rock formations are said to represent a mean old woman ("baba") who came on Ceahlau to feed her sheep. Deceived by the sunny days of early spring, she took off, one by one, all her nine-sheepskin waistcoats. When the frost came, it turned both her and her animals into ice, which over the years transformed into the stones we see now. 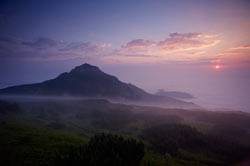 Best known for: Its legends and significance in the history of the Dacians, the ancestors of the Romanian people.
Ceahlau was considered to be the sacred mountain of Zalmoxis, the ancient deity of the Dacians.

The Ocolasul Plateau, with the Great Ocolasul Peak (6256 feet) - the highest peak in the Ceahlau Mountains – and the Toaca Peak (6246 feet)

Over 90 species of birds can be seen in the Ceahlau National Park. The capercaillie (Tetrao urogalus), the biggest among the birds in the park, can be seen in Piciorul Schiop and Poiana Maicilor, during the mating period in April. With a little luck you can also spot in the same area: the three clawed wod-pecker (Picoides tridactylus) a glacial relict, and the wall creeper (Tichodorma muraria). The raven (Corvus corax) usually builds its nest in the high areas of the mountain.

Among the rare birds nesting in the park are the cliff butterfly (a bird that could be found also in Cheile Sugaului and in Cheile Bicazului), the aquila (Aquila chrysaeltus) and the mountain cock (cocosul de munte).

The park is also home to the black goat (Rupicapra rupicapra), which has been colonized here, the lynx (Lynx lynx), the wolf (Canis lupus), the fox (Canis vulpes), the brown bear (Ursus arctos) and the pine marten (Martes martes). The elk (Cervus elaphus var. carpathicus) - monument of nature and the most valuable species of Ceahlau - can be admired in: Izvorul Alb, Poiana Maicilor, and Izvoarele Bistrei Mari.

The Painted Monasteries of Bucovina - www.RomaniaTourism.com/Monasteries.html