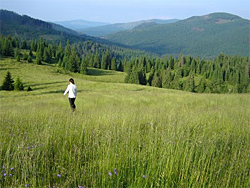 The Apuseni Nature Park (Parcul Natural Apuseni) - known as the cavers' paradise, protects one of the most interesting cave fauna in the country. Traces of the prehistoric man, as well as fossils of animals that lived in the Ice Age were found in several of the caves, along with rare bat populations. The higher ridges of the park are covered with spruce fir, while at lower levels the forest is dominated by mountain beech.
Limestone underlies most of the park and is responsible for the area's impressive landforms. Sculptured mountain ridges, mysterious underground rivers, and delicate cave decorations will surely keep visitors' photo cameras busy.

The complex karst landforms of Apuseni Nature Park are an attraction on their own, especially hikers with a fascination for geology. Deep valley and gorges, karrens and karst depression – where underground rivers and streams flow - give the landscape an exceptional character. Below ground lies the important and fragile ecosystem of the caves, the main attraction for amateur and professional cavers.

Note: Apart from the Bears' Cave and Scarisoara Glacier, caving in the Apuseni Nature Park is not visiting nicely prepared tourist caves but visiting them as the first explorers have seen them. That means that you'll have to climb, use ropes, crawl and creep to see their splendid beauty.

As opposed to other national and nature parks in Romania, the Apuseni Mountains are populated up to high altitudes, with permanent and quasi-permanent dwellings. The hamlets on the Ocoale – Scarisoara plateau, at 3840 ft., are among the highest settlements in the country.

If you wish to discover local life and preserved traditions, one of the main points of interest is the Aries Valley, where the beautiful villages of Albac, Garda, and Arieseni are located. Skilled artisans, the Motzi people, carve musical instruments, hope chests and houses from the local wood, the spruce. The Apuseni Motzi villages are some of the best places in which to find tranquility and timeless wisdom of the traditional village way of life. In Patrahaitesti, a little mountain village, you may hear the famous Bucium ("Alps horns"), used for generations in the Apuseni Mountains.

Best known for: Over 200 caves (including the famed Bears' Cave in Chiscau and the Scarisoara Glacier) and the predominant karst formations


Nearby large town: Oradea (50 miles northwest)
Another natural wonder in the Apuseni Park is the Bears' Cave, named after the skeletons of bears (extinct 15,000 years ago) discovered here by mine workers in 1975. Arranged on two levels, it features galleries of animals and castles-resembling stalagmites and stalactites more than a half mile long. Some of the stalactites are estimated to be 22,000 years old. They continue to grow at a rate of about one-third inch every 20 years. The upper level (292 miles) is open to visitors, while the second one (312 miles) is reserved for scientific research.

Location: Padis Area (7 miles from Pietroasa commune)
Nearby large town: Beius (22 miles northwest)
Web: www.padis.ro
One of the most spectacular and rugged lime formations in Romania, the area known as Cetatile Ponorului was declared natural reservation in 1952 and soon after became a natural monument. Extending some 21 miles, the area includes the Flowers' Glade (Poiana Florilor) and the Galbenei Gorges (Cheile Galbenei).

The cave fauna is the main attraction of the Apuseni Mountains, with some of the caves sheltering rare bat species, such as the dwarf bat (Pipistrellus pipistrellus). Fossils of animals that lived in the Ice Age, as well as traces of the prehistoric man, have been found in some of the caves in the park.

Protected mammals such as the bear (Ursus arctos), the Carpathian elk and the black goat (Rupicapra rupicapra) can be seen in the forest area. The park is also home to several alpine birds, such as the ural owl (Strix uralensis), the nutcracker (Nucifraga caryocatactes) and the lesser spotted eagle (Aquila pomarina).

The city of Cluj Napoca - www.RomaniaTourism.com/Cluj-Napoca.html

The city of Oradea - www.RomaniaTourism.com/Oradea.html

The city of Alba Iulia- www.RomaniaTourism.com/Alba-Iulia.html