Foreign visitors consider Romanians among the friendliest and most hospitable people on earth.
Romanians are by nature fun loving, warm, hospitable, playful, with an innate sense of humor.

Romania is associated with big names in arts and sports: 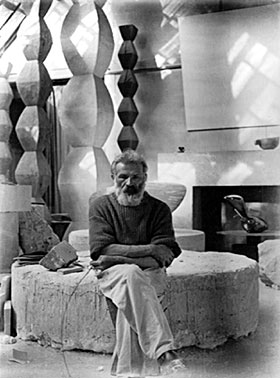 Constantin Brâncuși (1876 - 1957) — the artist whose works redefined sculpture, the most important sculptor of the Twentieth-Century.

Radu Lupu "If there's one pianist who challenges you to hear classical music in a whole new way, it's Radu Lupu. Since winning the Van Cliburn Competition in 1966, he's gained a loyal following for his idiosyncratic interpretations that always explore the complex emotions behind the music". (Attribution: CarnegieHall.org )

Ilie Năstase — Twice ranked as the world's number one men's player in the early 1970s, Ilie Nastase won two Grand Slam singles titles during his illustrious career: the US Open in 1972 and the French Open in 1973.
One of the greatest touch players of the post-war era, Nastase was runner-up at Wimbledon in 1972 and 1976; he won 57 career singles titles and 51 doubles titles and is one of five players to win more than 100 pro titles in singles and doubles. Every single year between 1970 and 1977 Năstase ranked in the top 10 tennis player .
In 1991, Ilie Nastase was inducted into the International Tennis Hall of Fame. 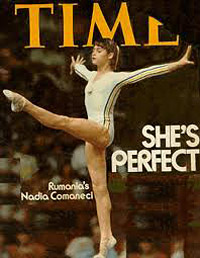 Nadia Comăneci — A gymnastics legend, stunning the world with her skills on the uneven bars, the first in the world to score a perfect 10.  Nadia is practically single-handedly responsible for the popularity of gymnastics as a sport, thanks to sweeping the Olympics for gold medals in her youth.

More than 55% of Romania's population lives in urban areas
(there are 230 large towns, 25 cities with a population of more than 100,000
and 8 cities with more than 300,000 inhabitants)
while 45 % of Romanians have their main residence in rural areas
(2,868 communes and 13,285 villages).
The main administrative divisions are called "judet" (county).
There are 41 counties in Romania.
The capital city, Bucharest (Municipiul Bucuresti), has the status of a county.

Romanian, a Latin based language which is a continuation of the Latin
spoken in ancient times in Dacia and Moesia - the eastern provinces of the Roman Empire.
A 31-letter Latin alphabet is in use.

Ethnic minorities (Hungarian and German) use their own languages in school and civil administration.

Literacy rate in Romania is 98%.

August 15: The Dormition of the Theotokos / Assumption of Mary (Sfanta Maria)

According to the Greek Orthodox Church, nearly every day of the year
is dedicated to the memory of at least one Christian saint or martyr.
If someone is named after a saint, that day becomes his or her name day
(Ziua Onomastica or Ziua Numelui) and, traditionally, is celebrated.

Ethnic minorities celebrate their own religious and commmunity holidays.