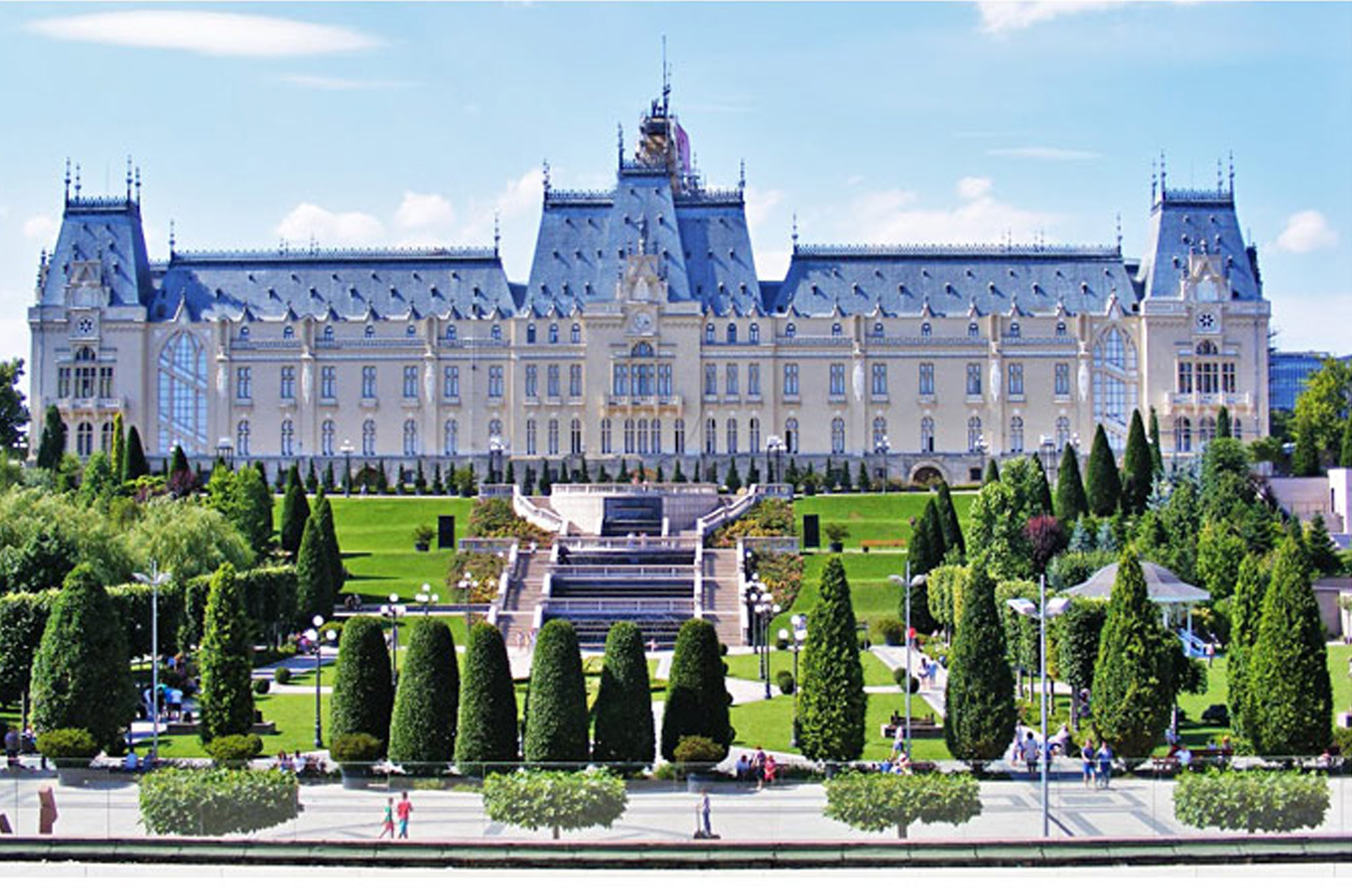 Facts about Bucovina and Moldova

About the name: The name Bucovina means the land of beech trees
Location: Northeastern Romania - between the Carpathian Mountains and the Prut River.
Bucovina is situated in the northern part of the region of Moldova (eastern Romania).
The region of Moldova (often referred to in the press as Moldavia) is not to be confused with
the Republic of Moldova an independent country onece part of Romania then a Soviet Union Republic.

Moldova rivals Transylvania when it comes to rich folklore, natural beauty and astonishing history.
Over the past 500 years, history, culture and religious life have molded Iasi, the cultural capital of Moldova.
Iasi boasts an impressive number of Orthodox churches, almost 100, most of them located in the Golden Plateau, representing the 'nucleus' of the city, around which the city developed over the centuries. One of the most famous monuments in the city is the stunning Church of the Three Hierarchs, built in 1639.
Another major landmark in Iasi is the neo-gothic Palace of Culture, built between 1900-1926, currently housing the Ethnographic Museum, the Art Museum, and the History Museum of Moldova.

Nestled in the rolling hills of northern Moldova is the region of Bucovina, home to one of the world's greatest Byzantine art treasures: the 'Painted Monasteries' - UNESCO World heritage sites.
Built in the 15th and 16th centuries and featuring colorful exterior frescoes depicting dramatic religious scenes, these richly decorated houses of worships are unique in the world.
The most famous of these, often called "the Sistine Chapel of the East" is Voronet Monastery.
Erected in 1488, Voronet's most stunning feature is a Last Judgment fresco painted on its façade. The blue paint, that has miraculously never faded, is known throughout the world as 'Voronet blue'. The artists here worked in isolation, guarding their trade secrets and to this day, the composition of the paint remains a mystery.
Other painted churches not to be missed include Sucevita, with its distinctive greens, and Humor, where the frescoes are predominantly red. Also nearby are, Arbore, Dragomirna, Moldovita and Putna monasteries.

The town of Suceava, is a convenient starting point for a trip to the monasteries. Once the capital of Moldova (1375 until 1565), Suceava has some noteworthy attractions of its own, such as the remains of the Fortress of Suceava built in 1388. Today, visitors can tour the remains of the impressive fortifications and take in a great view of the city. Other sights in Suceava include St. George Church (UNESCO World Heritage Site), Mirauti Church, the Zamca Monastery and a number of museums dedicated to woodcraft, ethnography, history and folk art. The Bucovina History Museum displays medieval armor, coins, tools and ancient documents. Its Hall of Throne is a re-creation of Stephen the Great's court with furniture, weapons and costumes.

A visit to Bucovina would not be complete without some nature walks through Ceahlau National Park. 90 species of birds can be seen in the park. Hikers won't want to pass up taking a crack at the Bicaz Gorges, a steep, twisting-and-turning climb more than three miles long.

20 Places to explore in Moldova and Bucovina

2.   City of Iasi, the cultural capital of the region of Moldova (eastern Romania).

3.   Bucovina convents of: Putna, Dragomirna, Bogdana-Radauti, Neamt, Agapia (one of the largest nun monasteries in the Orthodox world) and Varatec

4.   Trei Ierarahi Church in Iasi, built in 1635, its walls feature a real embroidery in stone.

6.   Bicaz Gorges – one of the most spectacular road passes in Romania

7.   Ceahlau Mountains National Park
Ceahlau was the sacred mountain of the Dacians, the forefathers of the Romanian people, home to their supreme god Zamolxe; (Ceahlau Mt. is seen by locals as Romania's equivalent of Greeks' Mt. Olympus - home of Greek gods).

8.   Wineries not far from Iasi or Suceava: Cotnari, Girboiu, Panciu and Averesti all producing world-class wines,
many quite unique, obtained from native grape varieties.

Main Museums in Moldova and Bucovina

The cuisine of Bucovina and Moldova regions in Romania is mainly based on pork meat and grain.
Some local dishes feature Habsburg and Polish influences.


Other Moldova culinary specialties include:
~ Bulz Moldovenesc (Sheepherder’s Polenta – traditional appetizer, sometimes main course, made from cornmeal, smoked rib, smoled sausage, aged sheep’s milk cheese "Branza de Burduf", butter and – optional – eggs)
~ Pârjoale Moldovenești (meatballs obtained from minced pork meat, potatoes, carrots and lots of dill and other herbs)
~ Sărmăluțe Moldovenești (the regional version of the popular stuffed cabbage – minced pork and beef meat, rice and spices wrapped in cabbage or sauerkraut leaves and baked in the oven – traditionally in a clay pot – for several hours).
~ Alivenci (a custard tart served as an appetizer or as dessert.
Alivenci ingredients include salty/ white or yellow cheese, cornmeal, sour cream, butter, eggs and yogurt or buttermilk. The salty cheese is replaced with cottage cheese - and sugar and vanilla are added - when the Alivenci are meant to be served as dessert).

Vineyards and Wineries in the region of Moldova

The largest and best-known wineries in the region of Moldova include:

Located in the small village of Cotnari, the Cotnari vineyards are famous for their delicious sweet white wines made of grapes rich in sugar and harvested in late autumn following the first frost. The quality of these wines relies on a combination of rich soil, the late harvest and the presence of a special mold (Botritis cinerea). The vineyards have a long history, spanning over seven centuries.
The winery's most popular wines include Francusa (dry), Feteasca Alba (semi-sweet) - highly appreciated for preserving the flavor and freshness of the grape; and the sweet, golden Grasa and Tamaioasa dessert wines.

Grasa de Cotnari is a naturally sweet wine with a delicate fragrance and a smooth interplay of fruitiness and acidity.

Tamaioasa Romaneasca - a sweet or semi-sweet white wine - has subtle honey and basil aromas, an exquisite amber color and a persistent rich taste. Its sweet taste may also suggest a blend of rose petals and wild-berries.

Moldova is also home to another well-know vineyard, Odobesti, one of largest and oldest in Romania.  There are written references to the Odobesti wine growing region dating from the 17th century. Among the wines produced at Odobesti are six varieties made from native grapes, namely: Galbena de Odobesti, Plavaie, Feteasca Alba, Feteasca Regala (white grapes) and Babeasca Neagra (red).

Galbena de Odobesti is a light, white, wine with a delicate bouquet that preserves the fragrance of the mellow grape.

Babeasca Neagra - is a full-bodied red wine with a delicate bouquet and a slight taste of clove.

The Bucium and Copou vineyards are set in the very hills that surround the city of Iasi. Bucium's wine-production centre also includes an interesting wine-growing and production museum and a wine tasting room. One of the most appreciated wines produced by Bucium winery is the sparkling obtained from gently-pressed Muscat-Ottonel grapes, which ensures a lower concentration of alcohol, sweetness, delicacy, and prolonged sparkle.

The two centuries old Beciul Domnesc - Odobesti (Princely Cellar), is the temporary home of a collection of overe 100.000 bottles of old and rare wines.

If visiting Panciu do not miss a walk through the vineyards to Panciu Royal Cellars, dating from early 1400s. Dozens of thousands of bottles of sparkling wines perfect their taste in Panciu Cellars.

Air transportation to Bucovina and Moldova

Travel to Bucovina and Moldova by train or bus

There are several daily trains and buses from to Bucharest and other major cities in Romania to Bucovina and Moldova regions.

Border crossing points into Bucovina and Moldova regions include:
Siret and Vicsani (travel from the Ukraine)
and
Albita, Galati, Oancea, Sculeni, Stanca (travel from the Republic of Moldova).