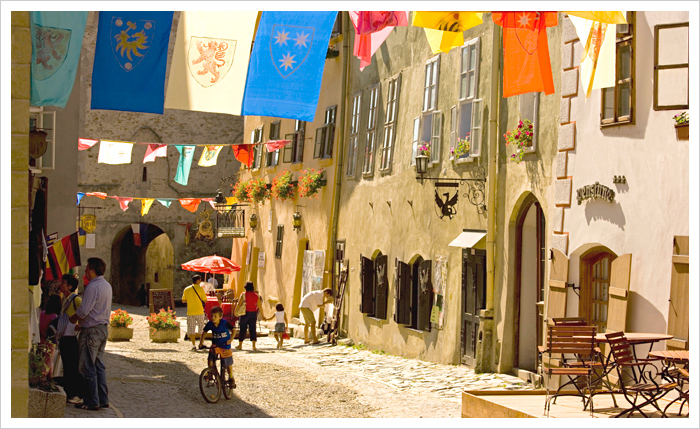 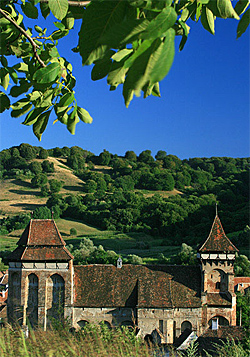 25 of its beautifully preserved architectural gems have been included by UNESCO in the World Cultural Heritage in acknowledgement of their natural, scenic and monumental appeal. A tour of these sites is a good way to discover Romania's history, artistic wealth and popular traditions. Each and every stop on this route will reveal a unique and stunning location.

The western half of Walachia (Southern Romania) is endowed with spectacular monasteries, thermal-spring spas, and charming villages set at the foothills of the Carpathian Mountains. Continue your trip along the Olt River Valley and discover Transylvania's forest-covered slopes, unspoiled landscapes, quaint villages, and fortified churches. In northeastern Romania, make time for Bucovina's painted monasteries, with their magnificent 15th-century frescoes, which are unique in the world. Cross the Prislop Pass into Maramures, famous for its hand-hewn wooden architecture and its unique tall-spire churches with double roofs. 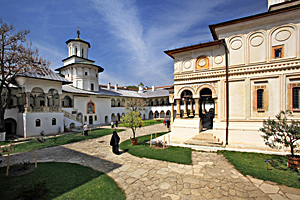 Founded in 1690 by Prince Constantine Brancoveanu, the monastery of Horezu is a masterpiece of the 'Brancovenesti' style. Renown for the richness of its sculptural detail, the treatment of its religious compositions and its painted decorative works, the monastery houses precious collections of frescos and icons dating
from the end of the 17th century and beginning of the 18th century.

The Hurezi School of mural and icon painting established at the monastery in the 18th century had a profound influence on religious art and architecture in the Balkan region.

The Medieval Fortified Churches of Transylvania 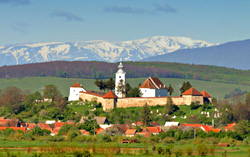 Transylvania is home to nearly two hundred villages with fortified churches built by the Saxons between the 13th and 15th centuries. Having to withstand constant invaders, the villages' central areas, where the church was located most of the time, were fortified with defense walls, having the capacity to shelter a large number of people. Seven of the fortified churches have been designated by UNESCO as World Heritage Sites. A visit to these quaint villages, placed amidst lush farmland and green rolling hills, will give travelers a taste of the long-gone medieval times.

Founded by German craftsmen and merchants known as the Saxons of Transylvania, Sighisoara is a fine example of a small, fortified medieval town which played an important strategic and commercial role on the fringes of central Europe for several centuries. 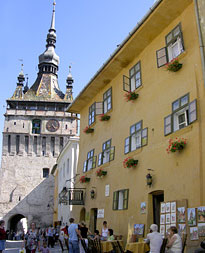 Sighisoara, one of the most beautiful towns in the heart of Transylvania, looks today much as it did 500 years ago. This medieval town was also the birthplace of Vlad Dracula - nicknamed Vlad Tepes (Vlad the Impaler) - ruler of Walachia from 1456 to 1462. It was he who inspired Bram Stoker's fictional creation,Count Dracula. His house is just one of the many attractions here. Others include the Church on the Hill, with its 500–year old frescos; the Church of the Dominican Monastery, renown for its Renaissance carved altarpiece, baroque painted pulpit, Oriental carpets and 17th-century organ; and the Venetian House, built in the 13th century.

Among the most striking attractions is the 210-feet high Clock Tower (Council Tower), built in the 14th century, where each day a different wooden figure emerges from the belfry on the stroke of midnight. The tower was raised in the 13th and 14th centuries when Sighisoara became a free town controlled by craft guilds, each of which had to finance the construction of a bastion and defend it during wartime. The fortification walls, built in the 14th and 15th centuries, were up to 50-feet high and featured 14 defense towers. Most of the old structure and 9 of the defense towers can still be admired today… (more information)

Among the most picturesque treasures of Romania are the Painted Churches of Bucovina (northeastern Romania). With their painted exterior walls, decorated with 15th and 16th century elaborate frescoes (featuring portraits of saints and prophets, scenes from the life of Jesus, images of angels and demons, heaven and hell), deemed as masterpieces of Byzantine art, these churches are one-of-a-kind architectural sites in Europe. Far from being merely wall decorations, the paintings represent complete cycles of religious murals. The purpose of the frescoes was to make the story of the Bible and the lives of the most important orthodox saints known to the villagers, by the use of images. Their outstanding composition, elegant outline and harmonious colors blend perfectly with the surrounding landscape. Whether you are interested in religion, history, art or architecture, you will be intrigued by the construction and decor - exterior and interior - of these edifices. The best preserved are part of monasteries in Humor, Moldovita, Patrauti, Probota, Suceava, Sucevita, and Voronet. Another, a small church, is located in the village of Arbore. Seven of the churches were placed on UNESCO's Word Heritage list in 1993. The eight one, Sucevita, is awaiting sanction to be added soon.

The Wooden Churches of Maramures

There is a strong tradition of building wooden churches across Eastern Europe, from Karelia and northern Russia all the way to the Adriatic, but in terms of both quality and quantity the richest examples are in Maramures. The Wooden Churches of Maramures are unique in shape and ornamentation and eight of them – in Barsana, Budesti Josani, Desesti, Ieud, Plopis, Poienile Izei, Rogoz and Surdesti, have been recognized by UNESCO as World Heritage Sites.

The characteristic high roofs and tall, narrow, pointed steeples are often collectively described as the Gothic Style of Maramures. The primary wood material used by the artisans was local oak, which has survived the elements with sturdy elegance until today. The interior walls of the churches were painted by local artists, with biblical scenes often juxtaposed against the familiar landscape of the village. Most of these houses of worship have stood proudly since the 17th and 18th centuries – some even longer. The oldest wooden church in Maramures is the Church on the Hill in Ieud, which dates from 1364.

Built in 1720, the wooden church in the village of Barsana (tracing its name to barsani, the local shepherds who breed long-haired sheep) features some impressive interior frescoes with baroque and rococo influences painted by Toader Hodor in 1806. Originally part of a monastic complex closed down in 1791, the church was moved to its present location at the beginning of the 19th century. This outstanding church boasts an impressive collection of icons painted on glass and old religious books now on display in the museum of the new Barsana Monastery.

Laid out the foothills around the Cosau Valley, the beautiful church in Budesti Josani (1643) is home to a valuable collection of icons painted on glass depicting folkloric scenes; the church also houses a unique collection of 15th century wooden icons painted on both sides. The outstanding Last Judgment fresco, painted by Alexandru Ponehalski in the 1760s, has been preserved in its entirety. The influence of the Western Gothic style can be seen in the arrangement of the main belfry, which is surrounded by four smaller turrets. The coat of mail and helmet of Pintea the Brave (1670 - 1703) - a local outlaw who fought against social injustice - can be seen in Budesti Monastery.

The beautiful wooden church with a tall spire and steep, low-reaching,
double-skirted roof in Desesti was built in 1770 in traditional Maramures style
and painted by the renowned post-Byzantine fresco painters Radu Munteanu and Grigore Zugravu.
Of significant interest are the Genesis, depicting the creation of Adam and Eve, and the Last Judgment scenes.

Ieud - Church of Birth of the Most Holy Mother of God

Built in 1364, the Church on the Hill is the oldest church in Maramures. Built of pine and fir with small windows, a double roof and a single, impressive steeple, it features 15th century primitive Byzantine-style murals. Fourteen icons, illustrating moments from the Judgment to the Crucifixion biblical scenes are placed along the path leading up to the church to recall The Way to the Cross that Jesus Christ walked to Golgotha.

Built between 1796-1798 and painted in 1811, this church's construction combines architectural elements from both the Maramures and Transylvania regions. High walls endowed with two rows of windows increase interior illumination and add to the distinctive style of the church, the only one in Maramures with a three-vaulted roof.

The church at Poienile Izie, built on fir logs between 1604 and 1632, is one of the most beautiful and best-preserved architectural monuments in Maramures. The church's interior frescoes, painted in 1794 by Gheorghe din Dragomiresti, feature some of the most dramatic depictions of hell, illustrated in the Last Judgement scene. An interesting element is the metal horned moon under the cross, considered a means of protection against the Tartars.

Built in 1663 and painted in 1785, the wooden church in Rogoz features an asymmetrical roof with the northern side larger and lowered to protect the people standing outside during important religious celebrations.
The overhanging roof protects the stylized horse-head carvings, believed to
keep evil spirits away. Unlike the typical churches in Maramures, this church
has a much smaller interior space, with walls no higher than 10 feet.

Dating from the 1st centuries B.C. and A.D the Dacian fortresses in Orastie Mountains show an unusual fusion of military and religious architectural techniques and concepts from the classical world and the late European Iron Age. Built as a defense ring around the capital of the Dacian kingdom, Sarmizegetusa (also Sarmisegetuza), the fortresses at Banita, Capalna, Costesti - Blidaru, Costesti – Cetatuie, Luncani - Piatra Rosie once formed the nucleus of the Dacian Kingdom. Although conquered by the Romans at the beginning of the 2nd century A.D. the extensive, well-preserved remains of these defensive works, still stand in spectacular natural surroundings and give a dramatic picture of a vigorous and innovative civilization.

Hiking enthusiasts can enjoy the trails in the nearby Retezat National Park, the oldest in Romania (established 1935). Covering 95,000 acres of pristine forests, alpine meadows, peaks, and some 80 glacial lakes, the area was designated as a UNESCO Biosphere Reservation and provides unforgettable hiking experiences among its peaks, valleys, rivers and gorges.

The sites are open, every day, from March 1 until November 30.

Access to Sarmisegetusa Regia:
Car (a recently paved road takes visitors half mile away from the site).
Park your car then walk 850 m (half mile) on the cobbled walking trail.

The area is best explored during the summer season with proper hiking shoes and directions.

“Rosia Montana is a landscape of great cultural importance
— a palimpsest of mining activity from Roman times through the Austro-Hungarian period to the Communist era”
(Attribution: Oxford University archaeology professor Andrew Wilson)

There is archaeological and metallurgical evidence of gold mining
in the 'Golden Quadrilateral' of Transylvania since the late Stone Age.
Roșia Montană (Alburnus Maior in Latin) was founded by the Romans, during the rule of emperor Trajan,

The earliest reference to the town is on a wax tablet dated 6 February 131.
Archaeologists have discovered, in the area centred around Carpeni Hill,
ancient dwellings, necropolises, mine galleries, mining tools,
25 wax tablets and many inscriptions in Greek and Latin.
The Romans left Dacia in 271 but mining in Roșia Montană continued.
Transylvania appears to have been a source of gold in Europe as early as the 3rd millennium BC
and some scholars have suggested that ancient Dacian artifacts of gold
may well trace their provenance to this very area.
It is possible that most Roman artifacts across Europe may be wrought from gold exported from Roșia Montană.

~~ The ancient Gold Mine Galleries and Mining Museum
Visiting hours: 10 am to 2 pm (Monday through Friday)
To reach the mining galleries, visitors need to descend 158 steps
(and climb the steps on the way back), via narrow corridors.
Average temperature in the mine (year-round): 45 F to 52 F
Reservations and additional information:
Dorin Rus (Mr.)
Telephone: (+4) 0747 122 857