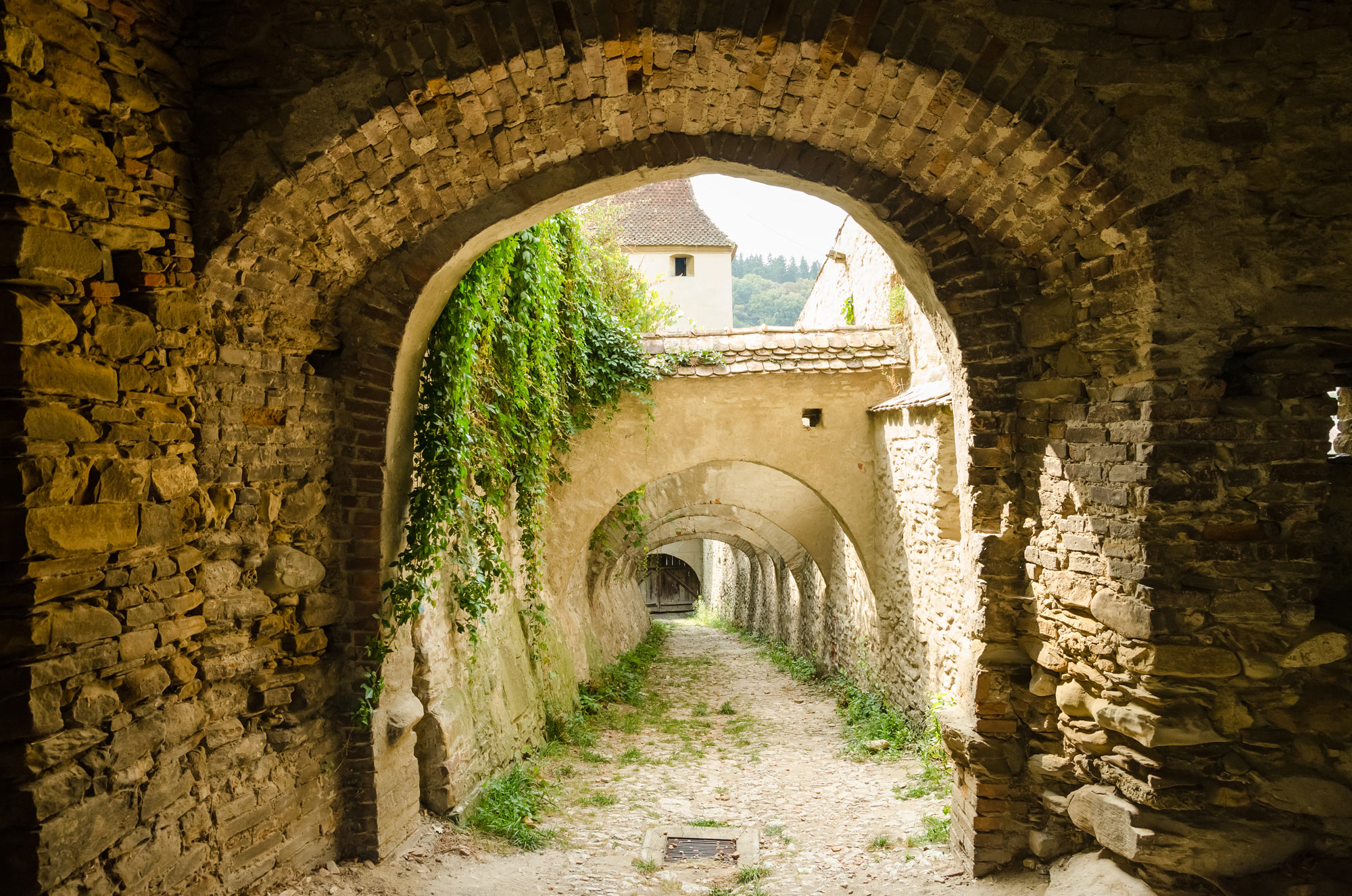 The gentle climate and the richness of the soil made the area around Alba Iulia inhabitable since ancient times and established Alba as a leading wine growing region since 1st century AD. Northwest of Alba Iulia are the Apuseni Mountains and in the east the Transylvanian Plateau with its rolling hills and deep, wide valleys. 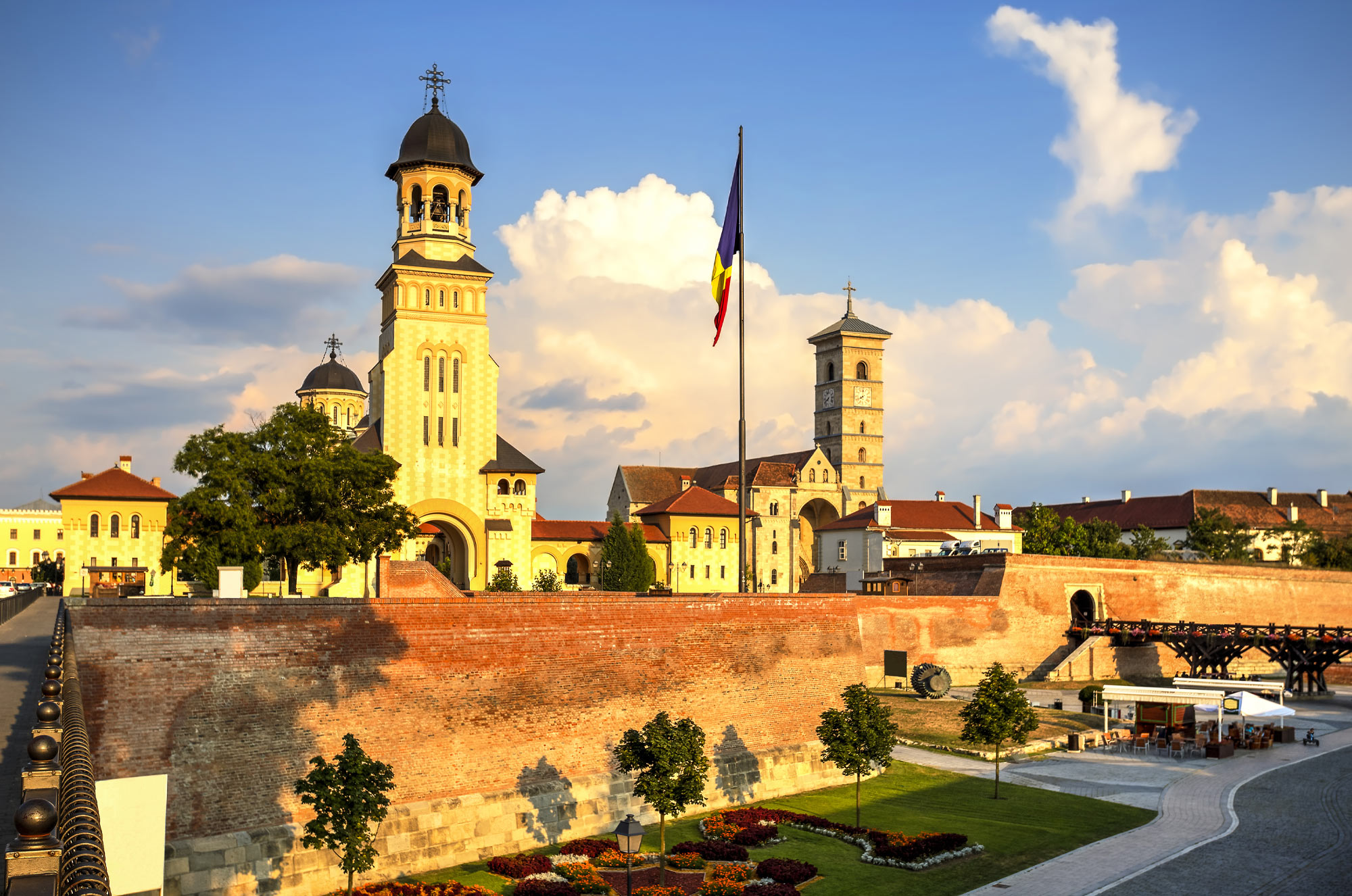 One of the oldest settlements in Romania, known in ancient time as Apulum, Alba Iulia served as the largest military and economic center during the Roman occupation. Temples, mosaics, thermae and statues, amphitheaters, the governor's palace "Daciarum Trium" – all rendered the original Dacian Apulul as the miniature copy of the mother Rome.

An Episcopal citadel and an important political, military and cultural center, Alba Iulia reached its peak between 1542-1690, serving as the capital of the independent Principality of Transylvania and the residence of the Transylvanian princes. In 1599, Mihai Viteazul (Michael the Brave) achieved here for a brief period of time the union of the three main provinces of Romania: Walachia, Transylvania, and Moldavia. The town later became an important printing centre. Nowadays the local universities continue the tradition of the old academic schools.

The peasant revolt led by Horea, Closca and Crisan, executed on February 28, 1785 on the Pitchfork Hill (Dealul Furcii) turned the city into a symbol of the fight for justice and freedom.

It was here that on December 1st 1918 the province of Transylvania announced its unification with Romania. In 1922 Prince Ferdinand was crowned King of Romania in an act which mirrored the union achieved more than four centuries earlier by Mihai Viteazul.

Alba means white and comes from the time when the Slavics called the settlement Belgrade ("White Castle"). Iulia comes from the name of Romanian Prince Gelu (Iulius in Latin) who ruled over the land around Alba Iulia during the 10th century. The Habsburgs tried to impose the name Alba Carolina (Karlsburg) in honor of the emperor Charles VI. In 1918 the town became once again Alba Iulia.

In the old town visitors can stroll along the wide, tree-lined streets of the Habsburg citadel, one of the most impressive in Europe, to discover the historical, cultural and architectural places of interest of Alba Iulia: the Roman Catholic Cathedral – the oldest and most valuable monument of architecture in Transylvania., the Batthyaneum Library, the Orthodox Cathedral of the Reunification, the Babilon Building – housing the National Museum of Unification, the Union Hall, the Apor Palace, the Princely Palace, and the University of Alba Iulia.

For those interested in natural attractions and outdoor adventures, Alba Iulia is a good starting point for exploring the Apuseni and Retezat parks.

The Alba Iulia citadel, designed by Italian architect Giovanni Morando Visconti, was built between 1716 and 1735,
using the Vauban military architectural system. It is the largest of this kind in Southeastern Europe.
The fortress is outstanding both for its architectural elements and for the beauty of its six gates, unique in European military structures. Doubtless the artists, sculptors Johann Koning, Johan Vischer and Giuseppe Tencalla, had been inspired by ancient mythology. 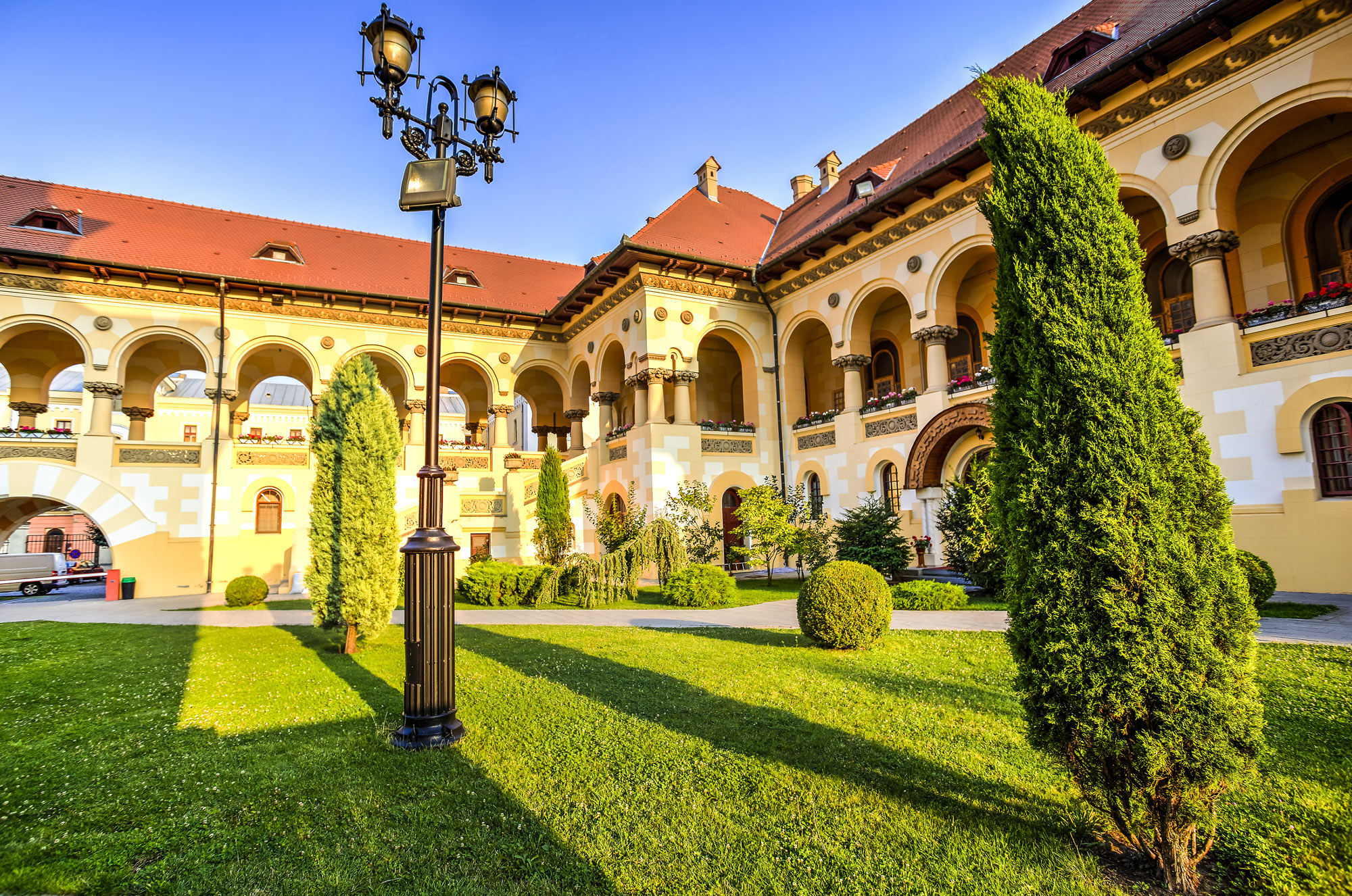 The gates, valuable samples of early baroque style, have served as a model for 18th century Transylvanian architecture.

(Palatul Princiar)
The Princely Palace, built in the 16th century, was Prince Mihai Viteazul's residence during the first political unification of Romanians in the 1600s. Following Ottoman and Tatar invasions the palace was destroyed. During the rule of princes Gábor Bethlen and George II Rakoczi the palace was restored but not to its previous condition. From 1700 on, the building was used as military barracks.

Opposite the palace is the Union Hall (Sala Unirii), where the unification act between Romania's other historical provinces and Transylvania was signed during the Great Assembly of December 1st 1918.

(Biblioteca Batthyaneum)
In 1780, Ignac Batthyany, bishop of Transylvania, transformed a former Unitarian church into one of the most famous libraries in Transylvania. The Batthyaneum library is known all over the world for its rare manuscripts - over 60,000 documents, including the Codex Aureus (9th century), also known as the Lorsch Gospel, containing the Gospel of Mark and Matthew, David's Psalms, Codex Burgundus (15th century), Biblia Sacra (13th century) the Pentateuch from Orăştie (1850), Şerban Cantacuzino's Bible, and the New Testament from Balgrad (1648).
The first astronomical observatory in Transylvania was founded here in 1792.

Apor Palace is located nearby the Bathyaneum Library. Built in the second half of the 17th century, it served as the residence of Prince Apor, and at the beginning of the 18th century as that of Austrian army leader, Prince Steinville. Apor Palace was renovated in 2007.

Orthodox Cathedral of the Reunification 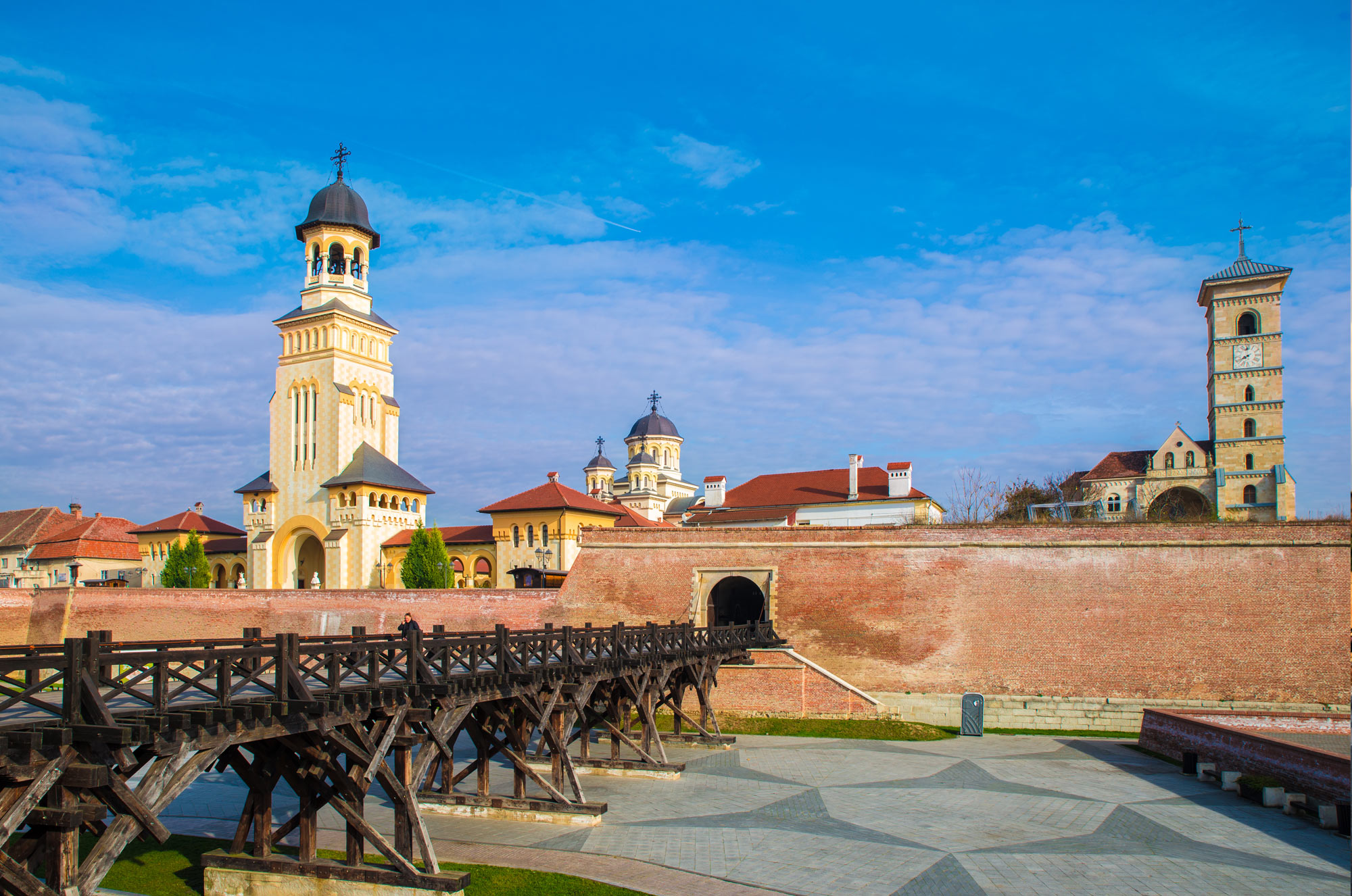 Located near the western entrance of the citadel, the impressive Orthodox Cathedral was built between 1921 and 1923 to celebrate Transylvania's reunification with Romania. The first monarchs of unified Romania, King Ferdinand I and Queen Marie were crowned there on 15 October 1922.

The Catholic Cathedral, built in the 13th century on the site of a Romanesque church destroyed during the Tartar invasion of 1241, features one of the most impressive early Renaissance interiors in Transylvania. The light coming in from the Gothic windows helps create inside an ethereal atmosphere. The tomb of Prince Iancu de Hunedoara (c.1400 – 1456) is located in here, as well as that of Polish-born Isabella Jagiełło (1519 – 1559), former Queen of Hungary. 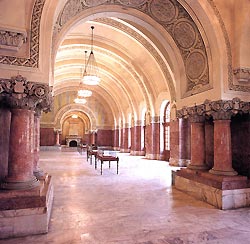 The National Museum of Unification, located in the Babylon Building, was originally built for military purposes between 1851 and 1853 and transformed into a museum in 1887. The museum features a prehistory section, a Dacian-Roman and feudal sections, and sections for the great battles with the Turks, the Revolution of 1848, the Unification of the Principalities in 1859, World War I, the Union of Transylvania with Romania.

Its two floors and over 100 rooms host the permanent exhibition, the warehouse, the library and the restorations laboratories. The Unification Hall, also belonging to the National Museum, was opened in 1895 as Military Casino of the Garrison in Alba Iulia, but its distinctive historical significance is given by the fact that it hosted, on 1 December 1918, the rally of the 1228 Romanian delegates from Transylvania, who decided the province's union with Romania.

Turda Salt Mine and town of Turda

An important salt-mining town, Turda was the seat of the Transylvanian Diet during the 16th century and hence,
one of the wealthiest towns in the region.
Walk along the main street lined with grand stone houses and some well-preserved baroque facades.
The Calvinist church and the Roman Catholic Church, both dating from 15th century,
feature impressive gothic architecture.

* Salt was extracted from Turda salt mine since well before the Roman times;
in 1932 salt extraction of salt stopped as cheaper salt was available from the nearby town of Ocna Mures. From 1932 and until late 1980's some mine galleries were used for cheese aging and storage.
Today, the mine is home to one of the world's most unique underground amusement parks: Salina Turda.
Website

* One mile east of Turda, visitors can relax at Baile Turda / Durgău Salty Lakes
(two natural heliothermic, salt-water, lakes formed on the site of an old salt mine).

Located in the Târnava valley - ( Transylvania ), Jidvei Winery is known for its superb dry white wines.
Wine tasting and private events can be arranged at Bethlen Castle (built in 1624) in Cetatea de Baltă,
located 5 miles NE of Jidvei Winery.

Location: 70 miles northeast of Alba Iulia
Sighișoara is the most authentic and one of the best preseverd medeival citadels in Europe.
Access: car, train
Sighisoara info

The Dacian Fortresses in Orastie Mountains

Alba Iulia does not have a local airport. The closest airports are located in:

The railways station is located about a mile southeast of Alba Iulia Citadel.
There are a few direct trains from Romania's main cities to Alba Iulia;
most international and domestic express trains stop in Teius (12 miles north).

For a list of international trains with service to/from Romania please visit:
www.RomaniaTourism.com/Transportation.html#ByTrain