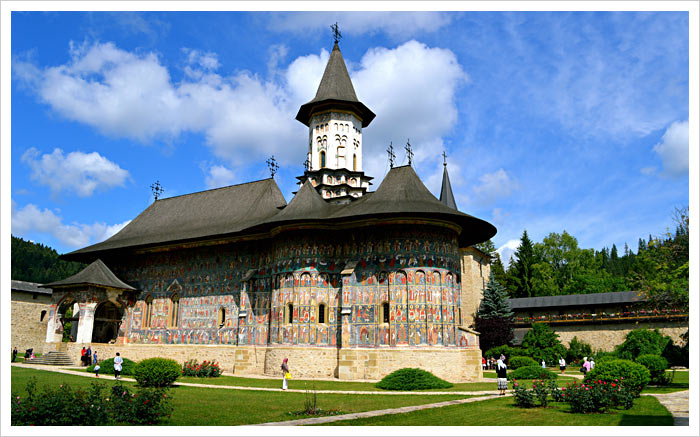 Among the most picturesque treasures of Romania are the Painted Monasteries of Bucovina (in northeastern Romania). Their painted exterior walls are decorated with elaborate 15th and 16th century frescoes featuring portraits of saints and prophets, scenes from the life of Jesus, images of angels and demons, and heaven and hell.

Deemed masterpieces of Byzantine art, these churches are one-of-a-kind architectural sites in Europe.
Far from being merely wall decorations, the murals represent complete cycles of religious events.
The purpose of the frescoes was to make the story of the Bible and the lives of the most important Orthodox saints known to villagers by the use of images. Their outstanding composition, elegant outline and harmonious colors blend perfectly with the surrounding landscape.

Visitors to the Painted Monasteries will often witness a nun or a monk beating a long beam with a mallet, tapping out a call to prayer. The tradition started during the siege of Moldova by the Ottoman Empire when the Turks forbade the ringing of bells. The striking of wooden or metal bars, known as "toaca", replaced the ringing of bells and thus, became a tradition, reinforced by the fact that in times of war, bells were often melted down to make cannons.

Whether you are interested in religion, history, art or architecture, you will be intrigued by the construction and decor — exterior and interior — of these edifices.

The best-preserved are the monasteries in Humor, Moldovita, Patrauti, Probota, Suceava, Sucevita, and Voronet. Another, a small church, is located in the village of Arbore. Seven of the churches were placed on UNESCO's World Heritage list in 1993. The eighth, Sucevita, is awaiting sanction to be added on the list.


Perhaps a tour of Bucovina's Painted Monasteries should begin here.
After all, the highlight of the small Arbore (Are' bo ray) church is a scene from Genesis, which adorns the western wall.
Monastery Arbore was founded in 1503 by Luca Arbore, the advisor of Stephen the Great (Stefan cel Mare), arguably the best-known and admired ruler of Moldova.
Because it was not founded by a prince, Arbore is the only church in the region with no belfry towers.
It was painted four decades later by Dragos Coman, one of the greatest, 16th century, mural painters of Romania.


Founded in 1530, Humor (Hoo mor) is rather small physically, but looms large among Bucovina's treasures with a variety of frescoes dating from 1535, including one illustrating the Return of the Prodigal Son and one with a "humorous" depiction of the devil as a woman.

The church, topped by a cross-shaped shingled roof, is without a steeple, indicating that it was built by a court official rather than a prince. The predominant hues of the frescoes are reddish brown with some rich blues and green infusions. An extremely valuable collection of icons from the 16th century is displayed in the monastery.

Monastery of Moldovita (Mol do vee' tsa), located in the village of Vatra Moldovitei, was commissioned by prince of Moldova, Petru Rares, in 1532. The predominantly gold and deep blue exterior murals were completed in 1537.
A large and vivid scene of the Siege of Constantinople is the highlight of the beautiful frescoes.

The Siege of Constantinople frescoes were inspired by a poem dedicated to the Virgin Mary in thanksgiving for her intervention in saving the city of Constantinople from a Persian attack in A.D. 626. In a wonderful political spin, considering the Ottoman threat to Moldavia in the 1500s, the Siege on the walls of Moldovita Church depicts the enemy as turbaned Turks rather than Persians.

Another stunning representation depicts the Tree of Jesse, representing Christ's genealogy, a wide-spread iconographical theme in Europe during the Middle Ages.

Built in 1487 and dedicated to the Holy Cross, the monastery at Patrauti is the oldest surviving religious site founded by Stephen the Great. Mural paintings, dating from around 1550, can still be admired on the west façade. In 1775, soon after Bucovina was annexed to the Habsburg Empire, the monastery was turned into a parish church.
Today, only the church and a wooden bell tower are still standing from the original monastic complex.

Only the church and the prince's residence remain today from the original ensemble founded by Petru Rares in 1530. In 1532, the church featured both outside and inside frescoes. In the 19th century, a large part of the mural paintings were replaced.

Probota was the first monastery to have external frescoes painted in Moldavia.

High walls surround Probota with corner towers for defense and a gate tower built in 1550.
Throughout its history, Probota Monastery has undergone several restorations and conservation campaigns.
More interventions were carried out in 1930 to replace some of the gothic tracery and repair the floor. In the steeple above the ruler's residence, a small museum exhibits icons, furniture, old books, coins and several artifacts.

Commissioned by Bogdan the 3rd and his son, Stefanita Voda, between 1514 and 1552 to serve as the Metropolitan Church of Moldavia, Saint John the New Monastery is now the seat of the Archbishop of Suceava and Radauti.

Saint George's Church houses the relics of Saint John the New, brought to Moldavia by Alexandru cel Bun in 1415. The relics are placed in a silver casket, richly decorated with scenes from the saint's life.
The outstanding exterior frescoes, illustrating scenes from the Old and New Testament, were completed in 1534 during the reign of Petru Rares, a glorious time in the era of religious murals.

The style of St. George's frescoes resembles those at Moldovita and Humor.
Although only some parts of The Hymn of the Dead and the legend of the Prodigal Son can still be seen on the southern wall, the church is nonetheless impressive, especially due to its mosaic roof and belfry tower.

High walls and heavily buttressed defensive towers surround the great monastic complex of Sucevita, giving it the appearance of a fortress. Founded in 1581 by Gheorghe Movila, Bishop of Radauti, it was later expanded by his brother, Ieremia, ruling prince of Moldavia, who added massive ramparts and turrets.

An elegant steeple resting on a star-shaped base tops the church. Massive eaves protect the outside frescoes, painted by local artists in 1602-1604.

Sucevita was the last of the 22 painted churches of Bucovina
and has the largest number of painted images.

The western exterior wall of the church is not covered with frescoes.
Legend has it that work stopped after one of the painters fell from the scaffolding and died.

Sucevita boasts a magnificent depiction of the Ladder to Paradise. Red-winged angels in orderly rows attend the righteous on a slanting ladder to the heavens, each rung inscribed with one of the monastic virtues.
Sinners fall through the rungs and are driven by grinning devils to the chaos of hell. On the south side, foliage entwines the rows of figures in the Tree of Jesse. Following it is the Hymn to the Virgin.

Sucevita was a princely residence as well as a fortified monastery. Today, the thick walls shelter a museum presenting an outstanding collection of historical and art objects. The tomb covers of Ieremia and Simion Movila – rich portraits embroidered in silver thread – together with ecclesiastical silverware, books and illuminated manuscripts, offer eloquent testimony to Sucevita's importance first as a manuscript workshop, then as a printing center.

Perhaps the most famous and stunning of the painted monasteries is Voronet (Vo ro nets), founded in 1487 by Stephen the Great to celebrate a victory over the Turks. Widely known throughout Europe as "the Sistine Chapel of the East" due to its interior and exterior wall paintings, this monastery offers an abundance of frescoes featuring an intense shade of blue commonly known as 'Voronet blue. The composition of the paint continues to remain a mystery even now, more than 500 years after the church was built.

Voronet Monastery was founded by Stephen the Great, ruling prince of Moldavia, to fulfill a pledge to Daniil, a hermit who had encouraged him to chase the Turks from Wallachiia. After defeating the Turks, Stephen erected Voronet in less than four months.

Portraits of ancient Greek philosophers, such as Aristotle and Plato, are featured in the Tree of Jesus fresco.

Added in 1547, the frescoes of this church illustrate biblical scenes, prayers, episodes of sacred hymns and themes such as The Last Judgment and The Ladder of St. John, featuring colorful and detail-rich imagery of apostles, evangelists, philosophers, martyrs, angels and demons.

Monastic life at Voronet was interrupted in 1785 under Habsburg rule. It returned only in 1991 with the arrival of a community of nuns which strives to harmoniously combine a religious life of prayer with housekeeping and farm work. The nuns run a painting workshop and provide guided tours of the monastery for visitors.

Smithsonian Magazine, June 2007
Excerpts of an article by Andrew Curry. Mr. Curry is a Berlin-based journalist and former editor at the Smithsonian.

Creating the frescoes took a sure, quick hand. Teams of four or five painters would first even out the church's rough stone walls with a thick layer of mortar, then smooth on a thin, fine-grained layer of lime plaster mixed with natural fibers such as finely chopped straw. Once the last layer was applied, the artists had only a few hours to work before the plaster dried. Apprentice painters would apply background color and decorations, while faces and hands were reserved for master painters.

A portrait of the donor and his family presenting a miniature version of the church usually appears to the right of the door in the nave of the churches. These painted models are important historical records of the original appearance of the monument.

There are no chairs or pews in Orthodox churches, only occasional choir stalls in the nave.

Artists had to be chemists as well, mixing pigments from rare clays, semiprecious stones and common minerals. Azurite and malachite created vivid blues and greens. Ochre from clay was heated to produce reds, yellows and browns. As the plaster dried, it reacted with the mineral pigments, fixing the colors. The technique, which involved no organic materials unlike frescoes that use egg whites as binder, made the colors unusually durable.

Easily accessible from both Suceava and Iasi (direct air and train connections with Bucharest), the Painted Monasteries in Bucovina can be viewed in one frustratingly rushed day, but are better savored in two or three.

There are daily flights from Bucharest to Suceava and to Iasi (approximate travel time: 1 hour),
operated by Tarom, Romania's National airline and budget airline Blue Air.

There are flights to Iasi from several cities in Europe including Brussels, London, Madrid, Munich, Rome, Vienna.

The easiest way to visit the Painted Monasteries is by car; a 30-minute drive (or less) separates one from another. Car rental is available in Suceava and Iasi.
Excursions and day trips are also available from Suceava and Gura Humorului.

Gura Humorului – located just 25 miles west of Suceava – provides a good base for exploring both the monasteries and the nearby villages. Guesthouses are available in Vama and Sucevita.

The painted monasteries in Bucovina are open
Monday through Sunday, from 9 am until 6:30 pm.
While inside the monastery, during the morning and afternoon mass,
please remain in place and refrain from taking pictures.