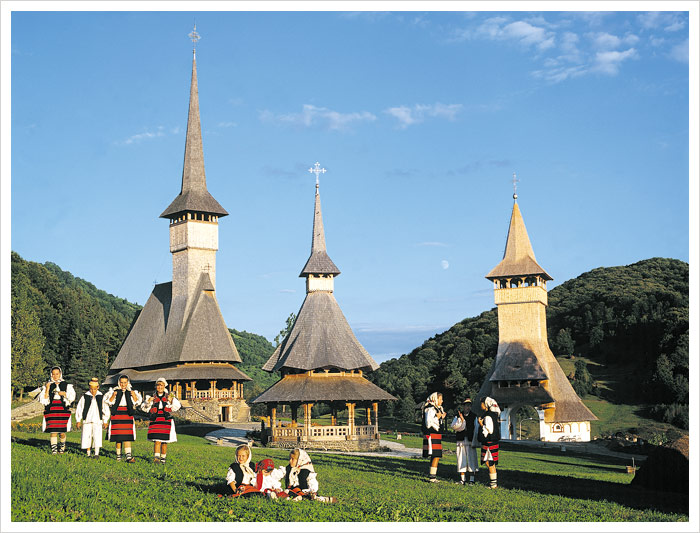 Location: Northwest Romania
(bordering the Ukraine to the north and Satu Mare county to the west)
Area: 6,662 sq miles
Population: Approx 530,000
Main cities: Baia Mare and Sighetu Marmatiei
Climate: Temperate continental with rich precipitation in the summertime and abundant snow in the wintertime

The northwestern Romanian region of Maramures is home to many villages where century-old traditions are still part of daily life. The inhabitants of this area have preserved, to an amazing extent, the rural culture and crafts of their Dacian ancestors.

Maramures villages are distinguished by their unique wooden churches with tall spires and shingled roofs. Woodlands still account for more than four-fifths of the land surface of Maramures. 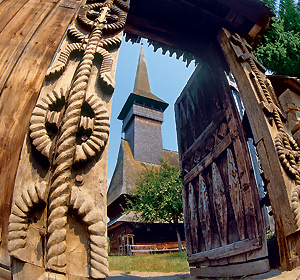 It is understandable, therefore, that wood has long been - and continues to be - the medium of expression for the region's artisans. Elaborate woodcarvings decorate the eaves, entryways and windows of houses. The local handiwork is also seen in the hand-woven carpets and intricate embroidery that adorns folk dresses still worn by the locals.

The local craftsmanship can be best observed in the monumental Maramures gates, guarding the entry to the houses. Supported by three columns, they feature traditional ornamental motifs, including the sun and the twisted rope - both symbols of life and continuity. Some of the most beautiful wooden gates are found in the villages of Vadu Izei, Desesti, Giulesti, Budesti, Sarbi, Barsana and Oncesti. The villages of Barsana and Oncesti have, perhaps, the greatest number of impressive gates.

As it has for hundreds of years, social life in Maramures continues to revolve around the village church.
The Wooden Churches of Maramures ) - in Surdesti, Plopis, Rogoz, Ieud, Poeinile Izei, Barsana, Budesti and Desesti - have been recognized by UNESCO as some of the most important sites of world heritage.
Unique in shape and ornamentation, they have characteristic high roofs and tall, narrow, pointed steeples, often collectively describer as 'the Gothic style of Maramures.'

The primary wood material used by the artisans who built them was local oak, which has survived the elements with sturdy elegance until today. The interior walls of the churches were painted by local artists, with biblical scenes often juxtaposed against the familiar landscape of the village.

The 'Maramures - World Heritage Trail' brochure (6 MB) can be downloaded at the link folowing: www.visitmaramures.ro

The spiritual philosophy of the people of Maramures is perhaps nowhere more apparent than in Sapanta. The town folks' ancestors considered death as a beginning, not the end, and this faith is reflected in the carvings in the town's unique Merry Cemetery . Blue wooden crosses feature a carved scene and humorous verses that endeavor to capture essential elements - both the good and the imperfections - of the deceased's life. Even without benefit of translation, visitors can appreciate the handiwork of sculptor Stan Ion Patras, who began carving these epitaphs in 1935, and his successors. Patras' house in the village is now a fascinating museum. Sapanta is also home to several wooden gates and one of the region's tallest wooden churches.

Sapanta is a 20-minute drive, to the west, from Sighetu Marmatiei, an important tourist and cultural center in the region. The outdoor village museum in Sighetu Marmatiei boasts dozens of homes and farm buildings assembled from around Maramures County. Other attractions include the 16th century Reform Church, the Elie Wiesel Memorial House, and the Victims of Communism Memorial (Museum of Arrested Thought), located in a former communist prison in the center of town.

Maramures is dominated by a landscape of mountains and rolling valleys. The Gutai, Lapus, Tibles Maramures and Rodnei Mountains are cut by passes named Huta, Gutai, Prislop, Setref, and Botiza. Three large valleys cross the region: Viseu, Iza and Mara. The Rodnei Mountains National Park, a natural reserve filled with a rich diversity of flora and fauna, has been awarded biosphere status by UNESCO. Here, chamois leap between rocks, the cry of eagles' rings out overhead and as the snows recede in the spring, crocus and other flowers create swathes of dazzling colors.

For a one-of-a-kind experience, take the narrow-gauge steam train. Starting from the small logging town of Viseu de Sus, the steam railway runs along a scenic road for about 30 miles, chugging behind an old steam engine. The train provides the only access - other than walking - to settlements higher up in the valley. During stops, you can watch workers load firewood and take on water from clear mountain streams. On the trip back down in the evening, the engine driver whistles for brakemen to stop the train - sometimes to pick up or drop off passengers, sometimes to stop to pick wild mountain mushrooms. www.cffviseu.ro/en/Forestry_Railway.html

Time-starved visitors can get a glimpse of Maramures
in a day tour operated by local tour operator Kristakis Travel.

Three Maramures day-tours are available in 2018:

It is a Maramures custom to welcome travelers and guests with homemade breads and a small glass of horinca - the local double-distilled plum or pear or apple brandy. Local food favorites include smoked pork sausage, smoked pork lard / bacon and fresh ewe's milk cheese.

A very popular dish in Maramures is the "Balmos", corn polenta mixed with ewe's milk cheese (or cheese fermented in wooden or clay pots) and baked in the oven.

At Easter, baskets containing painted eggs, 'pasca' (a sweet cheese babka), knot-shaped bread, pies, and braised lamb - are brought to the church to be blessed before the traditional Easter lunch.

Airlines with service to the region of Maramures: Tarom and Wizz Air

Travel to Maramures by train or bus

There are several daily trains and buses from/to Bucharest and other major cities in Romania to Maramures region.

Information on international trains with service to/from Maramures are available at: www.romaniatourism.com/transportation.html#bytrain

by Joyce Dalton
This section is courtesy of Travel Lady Magazine 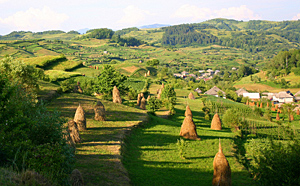 From the province of Moldavia, head westward along a good, but mountainous, road to Romania's most traditional region, Maramures. The drive takes about five hours with no stops, but this is virtually an impossibility, especially for photographers. Picturesque villages (notably Ciocanesti, whose houses covered with painted flowers and geometrics make it arguably Romania' s prettiest village), spectacular mountain scenery and a unique museum smack in the middle of nowhere The Museum of the Tree Roots (Muzeul Radacinilor) with a bizarre exhibit of figures sculpted from tree roots all beg inspection. Gawking becomes even more demanding once Maramures is reached. At Mosei, turn left toward Bistrita, then right after a few miles toward Sacel and Sighetu Marmatiei, the principal town. (Sighetu also can be reached by continuing straight at Mosei, but the lower road passes through the region' s most traditional villages.) From Sacel on, each village offers its share, and more, of wooden houses, many with sculpted designs on balconies and around entrances. Then, there are the towering carved wooden gates, attached to fences half their size, rising before even modest dwellings. 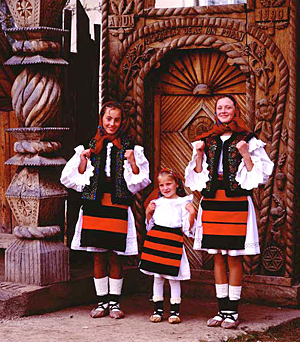 Maramures is Brigadoon land where the way of life has changed little over the centuries. In late afternoon, old women sit outside their gates coaxing coarse wool onto spindles. Many still favor traditional dress, meaning white frounced blouses, striped woven panels covering full black skirts, headscarves and "opinci", a sort of leather ballet slipper from which heavy yarn criss-crosses over thick socks. On Sunday, such dress is practically de rigueur, even for little girls.

Hardly a village lacks its own small wooden church dating to the 17th and 18th centuries. These are exquisite, high-steepled jewels with multiple gabled roofs, all of a pattern yet each distinctly unique. Seeing at least a few interiors is a must as many frescoes remain in good condition. If time is limited, the interiors at Ieud, Bogdan Voda and Poenile Izei are recommended. The latter depicts some highly original torments for such sins as sleeping in church. Although churches are usually locked, ask any passerby for the key-keeper by pointing at the door and saying "cheia" (pronounced kay-ya), meaning the key. Romanians are extremely kind and friendly and will be sure to help. While the main tourist activities in Maramures are gate-church- and people-viewing, the town of Sighetu Marmatiei has a few attractions worth visiting. The outdoor village museum, on the road into town, boasts dozens of homes and farm buildings assembled from around Maramures county. Even Oncesti s wooden church has been relocated here.

For a look at Romania s more recent past, an hour spent at Sighetu' s Museum of Arrested Thought can be instructive. Though only a block or two off the main street, it is not easy to find. Ask for the "Muzeul Inchisorii" (pronounced "moo ze ool un kee swah ree"), meaning prison museum. Although built before Communist 'Revolution' the Communist regime utilized the prison to detain the political opposition leaders and intellectual dissidents. Three tiers of cells and various exhibits may be viewed; an English-speaking guide is available.

An old synagogue and the childhood home of author and Nobel Peace Prize winner Elie Wiesel also are in Sighetul Marmatiei (Sighet for short). 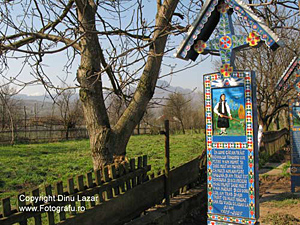 No trip to Maramures is complete without a look at the Merry Cemetery of Sapanta, a 20-minute drive from Sighet. Here, colorful folk art pictures and witty words carved into wooden headstones immortalize the deceased's foibles, occupations or family problems. No translations, but the pictures tell much of the story. An old woman bakes round loaves of bread, a young person bends in scholarly fashion over his books, one man is shot by soldiers while another tends his flock of sheep.

Beauty assumes many forms. For most travelers, the enduring traditions of Maramures and the magnificence of Bucovina's painted monasteries will define two of them.