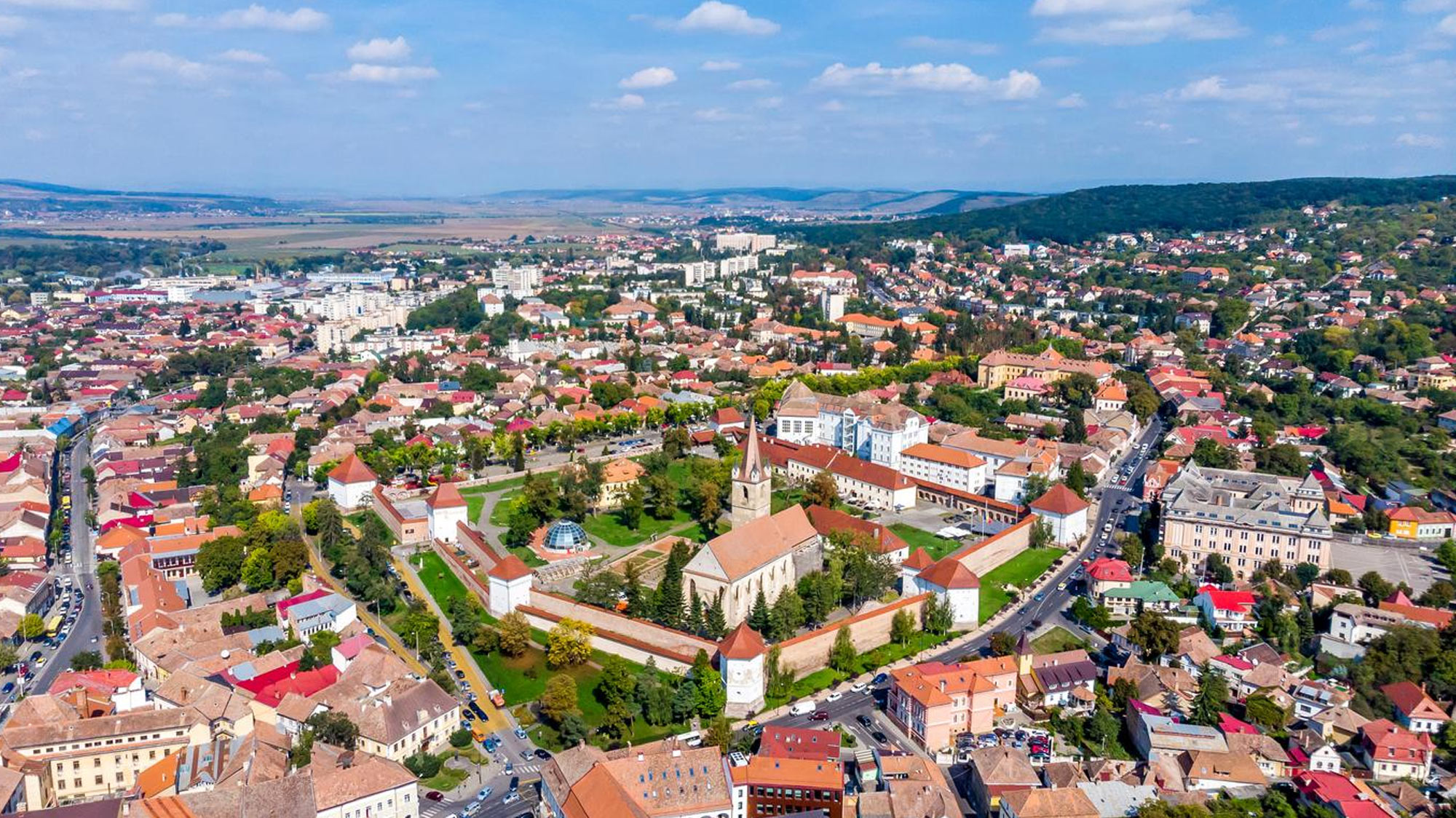 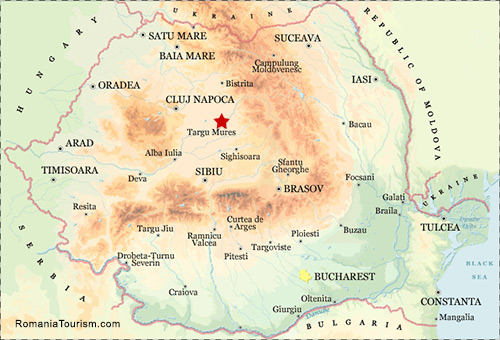 Named literally for a 'market' on the Mures River and known as the city of roses, Targu Mures (Marosvásárhely in Hungarian ~ Neumarkt am Mieresch in German) enjoys the best of both Romanian and Hungarian cultures. Numerous vestiges attest the presence of Neolithic cultures and those of the Bronze and Metal Ages in this area. Archaeological diggings have brought to light Roman relics in the surrounding towns.

The town was first documented as 'Novum Forum Sicolorum' (The New Market of the Seklars) in 1322. Beginning with the 16th century, Targu Mures excels as an important cultural and education centre. The first school appears in 1492. In 1786, the first printing shop is established and in 1802 count Teleki Samuel, chancellor of Transylvania, lays the foundations of the documentary library that bears his name to this day. The city received a major boost to its social and economic life in 1754 when it became the seat of the supreme court of justice of the Principality of Transylvania.

During medieval times, guilds, made up of groups of craftsmen, played an important role in the evolution of the town. Artisan guilds had their privileges recognized since 1493. In 1620, members of the guilds took part in the building of the town fortress. Two of the most important guilds were the shoemakers and tanners ones. In 1800, the shoemakers' guild had the most members, namely 254. The guild system lasted until 1872.

Targu Mures became a modern town in the second half of the 19th century, along with the expansion of the railway line. Today its centrally located Piata Trandafirilor (Roses Square) is lined with modern streetside cafes and restaurants, churches, and monuments. Targu Mures' top attraction is located at the south end of the square: the Culture Palace (Palatul Culturii), a flamboyant early 20th-century city hall with an outstanding stained-glass hall, housing some of main local museums.

Apollo Palace was built between 1820 and 1822 at the initiative of count Teleki Sámue.
The building was initially decorated in the late Baroque style and had only two stories.
The façade was modified in early 1900s, the only remaining Baroque elements are the reinforced vaults with double arcs.
The ground floor was used for retail activities while the first floor was used as living quarters.
On the second floor there was a large meeting hall, a restaurant and a café.
At the beginning of the 20th century the palace served as a venue for numerous shows and events. In 1923 Apollo Palace was sold to a new owner who decided to transform the balroom into apartments (1925 - 1927).
The façade was also remodeled at that time in an eclectic style specific to the early 20th century.
Today Apollo Palace is home to the local Art School.

The former seat of the Prefecture has been in use since 1711.
After its owner was condemned for treason, the house was confiscated and became the property of the County (Mures County).
Construction works to expand the building started in 1744 under the supervision of judge Dóza Mihai.
The neighboring plots of land were bought during the 19th century so that the construction could be further expanded.
The lateral wings were erected between 1824 and 1838, and the back wing between 1842 and 1843.
The ground floor served throughout the years as a prison and on the top floor as an assembly hall.
Currently, these spaces are used as workshops by the artists of Targu Mures.

The first elements of Baroque architecture appeared, in Targu Mures, in the second half of the 17th century.
The Pálffy House, built around 1640, reflects an evolutionary stage that surpasses typical Renaissance architectural elements such as those of the oldest buildings of Targu Mures, the Köpeczi and Nagy Szabó houses.
The edifice was built by judge Tolnai János and sold to the Pálffy family in 1885, hence the name by which the building is known today.
The building was renovated in 2006 and today it hosts the newly established Music School of the University of Theatrical Arts of Targu Mures.

The current headquarters of Mures County Council (also known as the former City Hall building),
The Perfecture building is part, together with the Culture Palace, of a spectacular secessionist ensemble built at the beginning of the 20th century.
It was the first building out of a series meant to change the appearance of the new city center.
The building was erected between 1907 and 1908 under the supervision of architects Komor Marcel and Jakob Dezsö, the founders of a distinctive Art Nouveau trend in Transylvania.
The palace is remarkable for its 192 feet high spire, built originally as a watchtower of the town, placed asymmetrically and covered - like the rest of the building - with colorful Majolica tin glazed pottery.
The impressive entrance hall- in the style of the Knights' Hall at Corvin Castle in Hunedoara – is decorated with huge stained glass windows.

The oldest Orthodox Church in Targu Mures
harmoniously combines Romanian rural architectural style with Baroque influences.
The church was built between 1793 and 1794 with the help of trader Hagi Stoian Constandin, who bought and donated the land, obtained all needed building permits and personally financed the works.
Orthodox and Greek-Catholics found themselves in need of building separate places of worship. Thus, two churches were built in the same period, right next to each other.

The Teleki Library, founded at the end of the 18th century by Sámuel Teleki, chancellor of Transylvania, contains a large collection of first editions and important manuscripts documenting Transylvanian history, as well as mathematical and scientific works. Count Sámuel Teleki, closely connected to the Mures area through his origins and the fact that he spent part of his life at his personal residence in Dumbravioara (a village only a few kilometers outside of Targu Mures), had established here the first city library by making his 40,000 books – some of which were unique editions published by famous European printing houses – available to the public.
More important collections were added in time, amounting to over 250,000 tomes today.

In 1492 Prince Stefan Bathory ordered for a castle-fortress to be erected around the Franciscan monastery and church. A few of the original elements have been preserved, among them wall fragments on the Southern and Western sides, the tower on the Southern wing, attached to the furriers' bastion, and ruins of the South-Western tower, included nowadays in the tanners' bastion. The structure of these towers and the fact that they are square-shaped are indicative of a medieval type military architecture.


Six bastions were added during the reign of Gabriel Bethlen (1613 – 1629). The furriers' bastion, erected in 1628, was divided into four levels, the vast interior space allowing for several craftsmen's guilds to function here. In addition to the furriers' guild after which the bastion was named, the locksmiths' and goldsmiths' guilds also had their headquarters here. Each bastion has firing holes for cannons on lower levels and for hand-held weapons in the walls of the first and second floors. The erection of surrounding curtain walls took until the second half of the 17th century. The inside of the walls are provided with archways supported by posts that sustain the guard path that is on the same level as the firing holes. There may have been defense ditches on the outside which were covered in time as they were not used. The fact that Transylvania lost its status of autonomous principality and became part of the Hapsburg Empire entailed a series of changes in what concerns military architecture. Modern, Vauban type fortresses were built in many Transylvanian towns such as Alba-Iulia, Oradea, Timisoara. The political changes in the principality were not without consequence to the fortress of Targu Mures. The houses inside the fortress were demolished to make place for the military headquarters and bakery. Following the restorations of 1962 – 1965, the walls and bastions reclaimed their initial form.

Reghin, straddling both shores of the Mures River, is renowned for the craftsmanship of the town's violin makers.
The town dates back to 1218, when the Saxons built a settlement on the ruins of a Dacian fortress.
The town's central square, Piata Petru Maior, is lined with 19th and early 20th-century buildings, featuring wrought-iron balconies and colorful facades.

Where: 28 miles east of Târgu Mureș
Address: Str. Eroilor 2, village Gurghiu
Originally built (in late renaissance style in mid-1600s) as a hunting lodge,
Rakoczi-Bornemisza mansion was rebuilt (1718 and 1734), in baroque style.
Significant renovations and expansion were commisioned in 1881.
The 300 years-old (12-acre) Gurghiu dendrological park is home to over 350 species of plants,
(local and exotic), including 130 species of trees and bushes.
Website
Telephone: (+4) 0256 321 773

Turda Salt Mine and Turda Mine Wine Cellars (Salina Turda)

For most of the 20th century, the former salt mines were used for cheese aging and storage.
Today, Turda - one of the world's oldest salt mines - is home to a spectacular, underground, theme park.

An important salt-mining town, during the 16th century, Turda was the seat of the Transylvanian Diet and one of the wealthiest towns in the region. Turda's main street is lined with grand stone houses and some well-preserved baroque facades. The town's Calvinist church and the Roman Catholic Church, both dating from the 1400s, are fine examples of Gothic architectural style.
Turda Salt Mine more Info.

Just 500 ft. away from the salt mine, at Turda Salt Mine Wine Cellars, visitors can try locally produced wines,
including the rare Issa Pinot Noir Rose (dry) and the Ice Wine ((sweet).

If interested in getting dental treatment while visiting Targu Mures,
below are contact information for dentistry clinics:
Pomadent - www.Pomadent.ro

Air transportation to / from Targu Mures

Airlines with service to Targu Mures include:
Tarom
WizzAir

Train transportation to / from Targu Mures

There are daily direct trains from/ to Targu Mures to/ from:
Cluj Napoca (2 hours and 30 minutes)
Miercurea-Ciuc(5 hours)
Hungary (Budapest) (travel time – 9 hours).

Bus transportation to / from Targu Mures

Central Targu Mures is small enough to cover by foot. Bus #18 takes you from Piata Teatrului and Piata Trandafirilor to the bus station; bus #5 goes to the train station. The cost of a one-way ticket is approximately 50 cents.