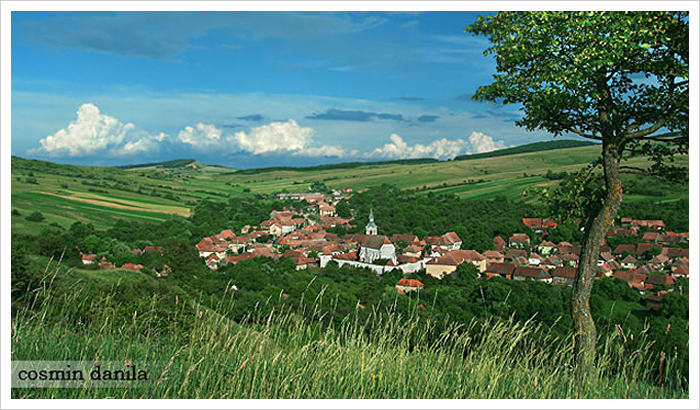 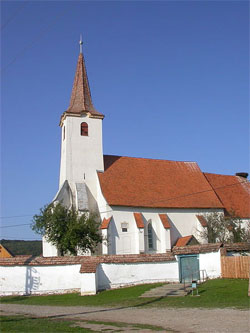 The fortified church at Darjiu (Székelyderzs in Hungarian), a UNESCO World Heritage Site, was initially built in Roman style in the 14th century, and later rebuilt in gothic style. It was fortified in the 16th century when locals drew inspiration from the fortified churches of neighboring Saxon villages.
The Gate Tower preserves its initial form, with openings for fire arms; wooden shutters provided protection against incoming bullets. The original interior frescoes, some of the most impressive Transylvanian medieval works, have been well-preserved;
best-known are the ones featuring the legend of St. Ladislaus.

Against the interior side of the defendig walls, grain-storage rooms, still in use today, have been built.
Smoked hams, meats and sausage have always been and still are stored in the main tower of the fortress, hanged on wooden hooks assigned to each family.
The hooks stay in the family and are inherited from one generation to another. The number of hooks, owned by a family, indicates the wealth and social status.
Grain may be picked up every morning, but bacon only once a week.

Since medieval times, on every Wednesday at dawn, the church bell announces that gates of the fortress
have been opened to allow the members of the community access to the food storage rooms.
Visitors can witness the weekly century-old custom of access to food provisions by making an appointment (before the end of the week that precedes the one when they are planning to be in Darju).
Tasting of locally produced plum brandy, sheeps milk fres cheese, smoked ham and many other traditional foods is available for a very reasonable fee.