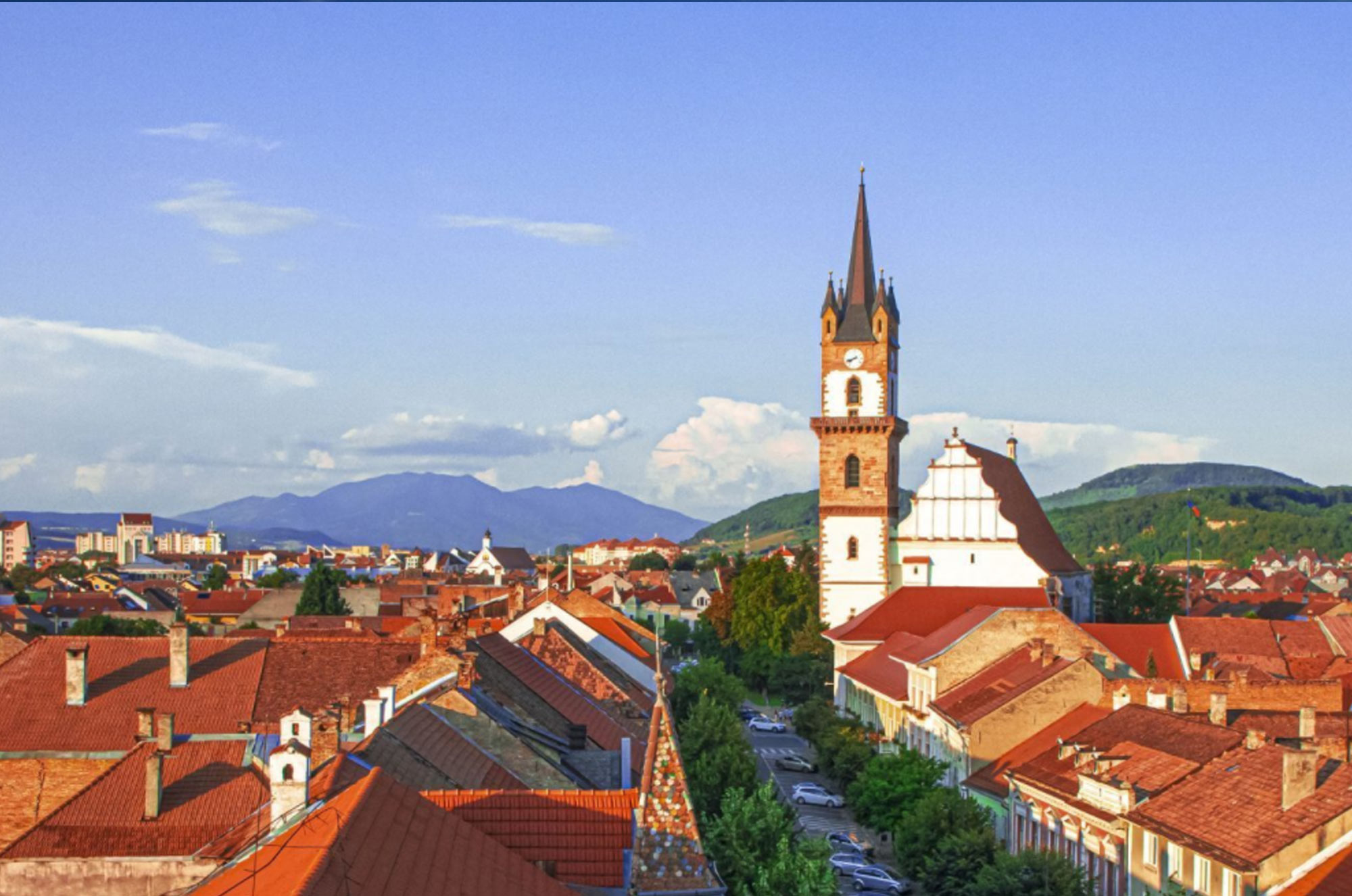 Located at the foot of the Bargau Mountains, not far from the Borgo Pass (Pasul Tihuta in Romanian) which connects Transylvania region to the Bucovina one, the town of Bistrita is one of the oldest around. Archeological findings indicate that the area has been inhabited since the Neolithic age, long before Bram Stocker chose it as the setting of his fictional Dracula's castle.

Saxon colonists, who settled here in 1206, helped develop the town into a flourishing medieval trading post. First mentioned in 1264 as Villa Bistiche, the name was later changed to Civitas Bysterce. Soon enough, Bistritz, as it was known to its German inhabitants, became one of Transylvania's most important Saxon citadels (Siebenbürgens).

The town was named after the Bistriţa River, which traces its origin to the Slavic word bystrica, meaning the serene water.

In 1353, Bistrita was granted the right to organize an annual 15-day fair and to have its own seal. Its coat of arms represented an ostrich with a horseshoe in its beak, which, according to medieval heraldry, symbolized that trade was among the main occupations of the inhabitants.

In Bram Stoker's novel, Dracula, the leading character, Jonathan Harker, visits Bistriţa and spends a night at the Golden Krone Hotel (Hotelul Coroana de Aur) on the eve of St. George's Day, before continuing his journey east to Dracula's castle. Although no such hotel existed when the novel was written, a hotel with the same name has since been constructed for visitors.

Unsettling times forced the city to build defense walls and Bistrita became a fortress. By 1465, it claimed 18 defensive towers and bastions. In 1602, Austrian troops under General Giorgio Basta damaged most of the defense system. In the mid-19th century, the gates of the citadel were destroyed by order of the Imperial Court of Vienna. Successive fires during this century caused further damage to the medieval citadel.

Today, the old town's quaint 15th and 16th century merchants' houses, the remains of the 13th century fortress walls and a generally unhurried pace have preserved some of Bistrita's  medieval atmosphere.

Vestiges of the 13th century fortress walls can still be seen near the Municipal Park along Kogalniceanu and Teodoroiu Streets. From the original 18 towers of the medieval fortress, only the Coopers' Tower, built between 1465 and 1575 on three levels, still stands today. The tower, now housing a collection of folklore masks and puppets (Galeria de Masti si Papusi),is open for visitors.

Formerly a Franciscan church, the Orthodox Church dates from the late 13th century. The stone carvings, mainly preserved in the chancel and the apse, belong to the Cistercian form of early gothic style. The interior was completely restored in baroque style and some late 14th century murals have been preserved.

The greatest attraction of Bistriţa's Main Square (Piata Centrala) is the Evangelical Church built by Transylvanian Saxons centuries ago. Construction of this gothic church began in 1470 and was completed almost 100 years later by Petrus Italus de Lugano, who added renaissance elements to the structure. A 246-foot steeple overlooking the city was added later, making it the highest stone church tower in Romania.

Inside the church you can admire a collection of 23 flags which belonged to the town's former craft guilds, valuable renaissance-style pews designed by Johannes Begler in 1516, and a 500-year old organ. The statues decorating the belfry (St Nicholas, the Holy Virgin with Child and Knight Roland) are representative of 15th century Transylvanian art and are similar to those found in the Black Church in Brasov and the Church on the Hill in Sighisoara. The Saxon Evangelical Church was restored several times, in 1897, 1901 and 1927.

Facing the Saxon Evangelical Church on the north side of the Main Square is the Sugalete row of 15th and 16th century merchants' houses. Built between 1480 and 1550, the thirteen gothic- and renaissance-style houses are connected by 20 archways supported by quadrilateral pilasters. The stores and workshops of the medieval guilds were once located in the basements and on the ground floors. The upper floors were designed to lodge the merchants' and the craftsmen's families. Several art galleries have opened here.

Built in the 15th century, the Silversmith's House earned its name by serving as the residence of one of the most renowned jewelers in Bistrita. A piece of architectural jewelry itself, the house features facades adorned with fine stone carvings in Renaissance style by Petrus Italus da Lugano. The entrance portal, also boasting impressive carvings, has a semicircular vault bordered by two fluted pilasters, while an arched passage allows access to the inner yard.  As with all medieval merchants' homes, the silversmith's workshop and store were situated on the ground floor. Nowadays, Bistrita's Fine Arts, Music and Folk Dance Schools are located here.

Explore the surrounding region where you will find the charming Saxon villages of Dumitra (Mettersdorf) and Tarpiu (Treppen), both with traditional churches and brightly painted houses. South of Bistria are the villages of Lechinta (Lechnitz) and Herina (Monchsdorf), the latter boasting an unusual Romanesque-style Evangelic Saxon church (1250-1260), recently restored.
Lechinta is well-known for its vineyards, and wine tasting can be organized in the town cellars.

The road from Bistrita to the Painted Monasteries of Bucovina runs east through the Bargau Valley and across the Tihuta Pass which peaks at 3,840 feet. The Bargau Valley encompasses some of the most beautiful unspoiled mountain scenery in the Carpathians with picturesque traditional villages located in valleys and on hillsides, ideal bases for hiking, riding or discovering their vivid tapestry of old customs, handicrafts and folklore.

The closest airports to Bistrita are located in:

Distance from Bistrita to: