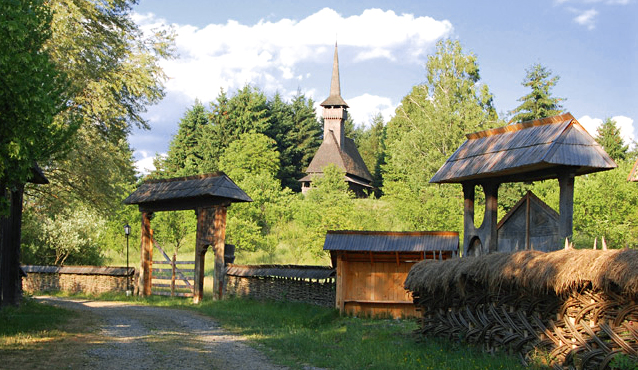 Set amid beautiful rolling hills and farmland close to the Tisa River, Sighetu Marmatiei, also known as Sighet, is one of the main towns in the Maramures region, an area noted for its rich centuries-old traditions. The inhabitants of this area have preserved, to an amazing extent, the rural culture and crafts of their Dacian ancestors

The outdoor Village Museum in Sighetu Marmatiei boasts dozens of homes and farm buildings assembled from around the Maramures region. Beautifully carved wooden gates and unique wooden churches with tall spires and shingled roofs can be seen in many nearby villages. The towering Maramures wooden gates, often-compared to triumphal arches, are the calling cards of the local wood carvers. Supported by four columns, they feature traditional ornamental motifs, including the sun and the twisted rope, both symbols of life and continuity.

Other attractions of this town, which boasts religious buildings of many denominations, include the 16th century Reformed Church, the Ethnographic Museum (see details), the Elie Wiesel Memorial House (see details) and the Museum of Arrested Thought (see details) located in a former communist prison in the center of town. 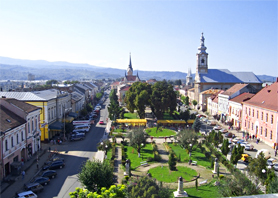 The spiritual philosophy of the people of Maramures is perhaps nowhere more apparent than in Sapanta – a 20-minute drive from Sighet. The town folks' ancestors considered death as a beginning, not the end, and this faith is reflected in the carvings in the town's unique Merry Cemetery. Blue wooden crosses feature a carved scene and humorous verses that endeavor to capture essential elements - both the good and the imperfections - of the deceased's life. Even without benefit of translation, visitors can appreciate the handiwork of sculptor Stan Ion Patras, who began carving these epitaphs in 1935, and his successors. Patras' house in the village is now a fascinating museum. Sapanta is also home to several wooden gates and one of the region's tallest wooden churches.

As it has for hundreds of years, social life in Maramures continues to revolve around the village church. The Wooden Churches of Maramures – located in the nearby villages of Surdesti, Plopis, Rogoz, Ieud, Poeinile Izei, Barsana, Budesti and Desesti - have been recognized by UNESCO as World Heritage Sites. Unique in shape and ornamentation, they have characteristic high roofs and tall, narrow, pointed steeples, often collectively describer as 'the Gothic style of Maramures.'

Before World War II, eight synagogues served the local Jewish community. Today, only one, built in 1885 in an eclectic Moresque style, is still standing and in use.

Sighet was a center of Hasidism and pilgrims from around the world still gather here to visit the tombs of the tzadikim (righteous ones) in the Old Jewish Cemetery.

Located at the corner of Dragos Voda and Tudor Vladimirescu streets, not far from the Wijnitzer Klaus synagogue, the house where 1986 Nobel Peace Prize winner Elie Wiesel was born is now a museum dedicated to the victims of the Holocaust and the Jewish way of life in Sighet before World War II. Born here in 1928, Elie Wiesel is the author of over 40 books, the best known of which is Night, a memoir that describes his experiences during the Holocaust and his imprisonment in several concentration camps.

Wiesel writes candidly of his childhood in Sighet, where his parents were shopkeepers like many other Jewish townspeople. The town was annexed to Hungary in 1940. In 1944, Elie, his family and the rest of the Jewish community were placed in one of the two ghettos in Sighet. The Wiesel  family lived in the larger of the two, on Serpent Street. On April 19, 1944, the Hungarian authorities deported the town's Jewish population to Auschwitz–Birkenau.

Housed in a baroque-style building from 1730, the museum displays a valuable collection of folk masks, old ceramics, carpets, woodcarvings, handmade rugs, icons painted on glass and other pastoral heritage items.

Laid out in the style of a traditional Maramures village, Sighet's open-air ethnographic museum is home to numerous houses, farm buildings and a typical wooden church, all original structures transported from regional villages to the museum's grounds.

Sighet's infamous prison, one of the most oppressive in the country during the communist years, witnessed the torture and starvation of numerous members of Romania's intellectual and political elite during the 1950s. Today a museum dedicated to the memory of the prisoners and the resistance movement in communist Romania, the prison features photographic displays illustrating the history of this gloomy institution. Those interested can also visit the prison's cells and torture chambers. 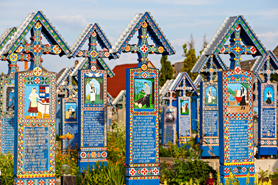 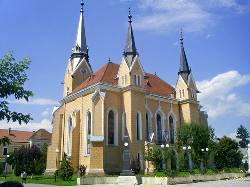 Maramures is dominated by a landscape of mountains and rolling hills. The Gutai, Lapus, Tibles Maramures and Rodnei Mountains are cut by passes including the Huta, Gutai, Prislop, Setref and Botiza. Three large valleys cross the region: the Viseu, Iza and Mara. The Rodnei Mountains National Park, a natural reserve filled with a rich diversity of flora and fauna, has been awarded biosphere status by UNESCO. Here, chamois leap between rocks, eagles' cries ring out overhead and as the snows recede in the spring, crocus and other flowers cut swaths of dazzling colors across the landscape.

Sighetu Marmatiei is also the starting point for visiting a number of famous valleys with traditional villages: Tisa, Iza, Viseu, Mara and Cosau.

Across Eastern Europe, from Karelia and northern Russia all the way to the Adriatic, there is a strong tradition of building wooden churches, but in terms of both quality and quantity, the richest examples are in Maramures.

Woodlands still account for more than four-fifths of the land surface of Maramures. It is understandable, therefore, that wood has long been – and continues to be – the medium of expression for the region's artisans. The Wooden Churches of Maramures are unique in shape and ornamentation. The characteristic high roofs and tall, narrow, pointed steeples are often collectively described as the Gothic Style of Maramures.

The primary material used by the artisans was local oak, which has survived the elements with sturdy elegance until the present day. The interior walls of the churches were painted by local artists, with biblical scenes often juxtaposed against the familiar landscape of the village. Seven of the almost 100 wooden churches in Maramures have been included on the UNESCO World Heritage Sites list.

Built in 1720, the wooden church in Barsana features some of the most representative baroque indoor murals in Maramures. This outstanding church boasts an impressive collection of icons painted on glass and old religious books.

Dating from 1643, the church in Budesti is home to a valuable collection of icons painted on glass which depict folkloric scenes; it also houses a unique collection of wooden icons painted on both sides. The influence of the Western Gothic style can be seen in the arrangement of the main belfry, which is surrounded by four smaller turrets.

This wooden church was built in 1770 in traditional Maramures style and painted by the renowned post-Byzantine fresco painter Radu Munteanu. The interior is home to a collection of 14 painted wooden icons of great artistic value.

Built in 1364, the Church on the Hill is the oldest church in Maramures. Built of pine and fir with small windows, a double roof and a single, impressive steeple, it features 15th century primitive Byzantine-style murals. Fourteen icons, illustrating moments from "Judgment" to "Crucifixion" are placed along the path leading up to the church to recall "The Way to the Cross" that Jesus Christ walked to Golgotha.

Built between 1796-1798 and painted in 1811, this church's construction combines architectural elements from both the Maramures and Transylvania regions. High walls endowed with two rows of windows increase interior illumination and add to the distinctive style of the church, the only one in Maramures with a vaulted roof.

This is one of the most beautiful and best-preserved architectural monuments in Maramures. An interesting element is the metal horned moon under the cross, considered a means of protection against the Tartars. Built in 1604, the church's interior frescoes feature dramatic depictions of hell.

Built in 1663 of elm and painted in 1785, the wooden church in Rogoz features an asymmetrical roof with the northern side larger and lowered to protect the people standing outside during important religious celebrations. Unlike the typical churches in Maramures, this church has a much smaller interior space, with walls no higher than 10 feet.

For a one-of-a-kind experience, take the narrow-gauge steam train from Viseu de Sus. Starting from this small logging town, the steam railway runs along a scenic road for about 30 miles, chugging behind an old steam engine. The train provides the only access, other than on foot,  to settlements higher up in the valley. During stops, you can watch workers load firewood and take on water from clear mountain streams. On the trip back down in the evening, the engine driver whistles for brakemen to stop the train, sometimes to pick up or drop off  passengers, sometimes to gather wild mountain mushrooms.
For more information, please visit: www.romanianmonasteries.org/maramures/mocanita

Past is present in Maramures. To experience both, forgo the larger towns for homestays, an increasingly popular and accessible option in the more than 200 villages.

Daily trains connect Sighetu Marmatiei to Bucharest, Cluj Napoca, Arad and Timisoara. Trains also depart daily to Viseu de Jos, most of them continuing to Salva and Ceblean, the junctions for trains to Vatra Dornei, Campulung Moldovenesc, Gura Humorului, Suceava, Oradea and Brasov. The train station is located about a half-mile from the town center.

To check the latest train schedules for domestic routes, please visit the website of the Romanian Railways: www.cfrcalatori.ro
The site has complete information about domestic train schedules and fares.

Note: For departures from /to Bucharest, please select Bucuresti Nord.

Nearest SNCFR's Advance Booking Office is in Baia Mare.
Address: Str. Victoriei 57, Baia Mare
Telephone: 0262 219.113
You can get train schedule information and make reservations up to 24 hours in advance at this office. Tickets for same-day travel can only be purchased at the station.

Distance from Sighetu Marmatiei to:

For a list of available accommodations in Sighetu Marmatiei please click here or check our Accommodations guide.