Home About Romania Romania in the Press Bucharest: Brick by Brick

With steady determination, Bucharest constructs a foundation for its future.

We are in Piata Romana — Roman Square. Traffic swirls around us, funneled into and out of the circular intersection by six converging roads. This is modern Bucharest: shiny vehicles shuffling for space, ornately European commercial buildings framed with gaudy advertising billboards, crowds of purposeful pedestrians milling at every crossing.

Whichever road we choose from here will take us on a journey not only across Romania's capital but also through a cross section of the city's history.

The counterclockwise revolutions of the traffic at this busy junction are appropriate: In the course of a 30-minute drive, we will turn back time.

Let's go south, along General Gheorghe Magheru Boulevard. If this broad, tree-lined avenue reminds you of Paris, the French planners commissioned by Romania's King Carol I in the 19th century did their job. Under their guidance, a haphazard patchwork of medieval neighborhoods was flattened and replaced with a sophisticated layout of mansion-lined streets and leafy parks. It was not the last time that a ruler stamped his mark on the fabric of Bucharest. 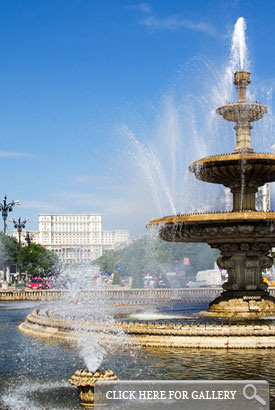 The boulevard passes within a couple of blocks of Revolution Square, where four decades of communist rule came to an end 22 years ago. We pass the distinctive skyscraper housing the InterContinental Hotel, then cross University Square, the scene of some of the heaviest fighting during the 1989 revolution. Look carefully and you'll see that some of the buildings are still bullet-pocked.

The revolution culminated with the execution of the country's communist dictator, Nicolae Ceausescu. Nearly a quarter of a century later, his ideology has been comprehensively swept away by free-market economics, but his memory stubbornly lingers in one of the greatest follies of 20th-century city planning.

As we drive south, we cross an avenue designed on a monumental scale. The receding lines of the road, with neatly planted trees and ranks of stone apartment blocks on each side, converge in the hazy distance at the foot of the world's second-biggest building (after the Pentagon), Ceausescu's "House of the People."

One-sixth of Bucharest was bulldozed in the 1980s to make way for the avenue and the mammoth marble edifice at the far end. Around 70,000 people were relocated from their condemned homes, while 26 historic churches, three monasteries and two synagogues fell victim to the wrecking balls.

The project was on too grand a scale to undo after the fall of communism, so the city has had to make the best of the deceased dictator's overblown architectural legacy. The House of the People (which, in fact, was intended to house Ceausescu and his wife as well as the Communist Party headquarters) has become the seat of Romania's democratic government.

We continue onward, passing between the bleak rows of concrete apartment blocks that betray the true face of the old Romania. In the outer suburbs, the apartment blocks are increasingly interspersed with quaint wooden houses behind picket fences.

With a final flourish of brand-new industrial buildings and a vast French-owned supermarket, the city ends and the countryside begins. Centuries of development and political upheaval are left behind. We pass through villages that appear timeless. Elderly women in traditional dress amble along the roadside. Horse-drawn carts loaded with hay trundle along the highway. Signs warn of crossing livestock.

While Bucharest has already marched into the 21st century, its rural hinterland is only just beginning the journey. The percentage of the Romanian workforce employed in agriculture (30 percent) is nearly 10 times the average of most European countries, yet the contribution of agriculture to Romania's gross domestic product has halved in the past five years and continues to decline.

Since Romania joined the European Union in 2007, modernizing the country's agricultural sector has been one of the top priorities, with a total of €14.5 billion of investment promised until 2013.

In terms of population and land area, Romania is the seventh-largest country in the EU, and yet it currently produces the lowest yields for important crops such as corn, wheat and sunflowers. There is huge potential for agricultural growth, with both foreign investors and local farmers standing to reap the harvest — literal and metaphoric.

Already there are signs that the green revolution is beginning to gain momentum in Bucharest's rural backyard. Antiquated farm machinery is being replaced. Acres of farmland are now encased in efficient plastic greenhouses. And in most villages you will notice, among the traditional homesteads, newly built mansions with top-of-the-range BMWs parked outside. Times are changing.

Perhaps the biggest surprise is that it has taken so long. From 1989 onward, admission to the EU was the overriding aim of democratic Romania. Preparation was protracted and painful and involved overhauling the centralized economy and dismantling the communist bureaucracy.

Since the momentous treaty was signed in 2007, many Romanians complain that they have been treated as second-class EU citizens. Several EU countries, including the U.K., France and Germany, have elected to maintain restrictions on immigration from Romania until 2014.

From January through April 2011, Romanian exports to the rest of the EU were up over the previous year by an astonishing 30.6 percent. In the same quarter, the industrial sector expanded by 10 percent. Car manufacture has led the way. In 1999, the Romanian car maker Dacia was bought by Renault and is now producing a competitive range of vehicles that appeal to increasingly cash-conscious consumers in the EU and Russia.

A newfound sense of pragmatism is starting to reach other sectors. In the first flush of free-market optimism, Bucharest's hospitality industry rushed toward high-end prestige development. A host of 4- and 5-star hotels blossomed around the capital until supply greatly outstripped demand.

The upmarket Continental Hotels logged a €4.8 million loss last year but discovered that its budget 2-star Hello Hotels brand was flourishing. "We want to keep building Hello Hotels and give up 4-star hotels," says Continental's owner, Radu Enache. "The economic outlook suggests that it is better to develop 2-star hotels."

The lengthy delays ahead of Romania's accession to the EU were once a sore point. Today, with an increasingly uncertain economic climate throughout Europe, it appears that the country will be able to learn from the mistakes of other EU members as well as from the lessons of its own totalitarian past.

Moving forward, there will be less reliance on grandiose projects. Bucharest has had more than its share of those. Instead, there is a focus on constructing the future on solid foundations, steadily, field by field, brick by brick.

Nicolae Ceausescu was not the only ruthless leader to cast an indelible shadow over Bucharest. In the 15th century, Romania was under the grip of a man whose brutality has become the stuff of legend: Vlad Tepes - Vlad the Impaler. His family name was Draculea, thus providing the name and inspiration for Bram Stoker's famous creation, Dracula.

Dracula's Tomb is located within a monastery on a tiny island in the middle of Lake Snagov, 20 miles north of Bucharest. The best way to reach the island from the shore is to row there in a hired boat (ideally on a weekday — the lake is a favorite weekend hang-out for day-trippers from Bucharest and gets very crowded). Vlad the Impaler's simple tomb is located in the gloomy stone interior of the UNESCO-listed Snagov Monastery. When, in 1931, the tomb was found to be empty, the Dracula legend was chillingly reinforced.

Heading back to Bucharest, it is worth stopping off at Mogosoaia Palace, a summer residence built in 1700 by Prince Constantin Brâncoveanu of Wallachia for his wife. There is a modest museum inside the palace, but for many visitors the main attraction is Lenin's Graveyard, just outside the palace walls. It was here that statues of Lenin and the Romanian communist prime minister Petru Groza were unceremoniously dumped after being removed from central Bucharest in 1990.

The tipping point of the 1989 revolution was a speech given by Ceaus¸escu to the masses gathered beneath his balcony in Revolution Square. The boos of the crowd signaled the end of his autocratic regime. Visibly confused, he was whisked away by helicopter and soon after was caught and executed close to Lake Snagov. That fateful episode is commemorated in the square by the $2 million Memorial of Rebirth, a controversial 75-foot sculpture that has been described as a "potato skewered on a stake."

The National Museum of Art of Romania occupies the former Royal Palace beside Revolution Square and boasts a collection that includes works by Rembrandt, Tintoretto, El Greco and Monet. But its most important collection is of medieval icons and wooden altars salvaged from Romanian churches demolished during the communist era.

Several of those churches were flattened to make way for Ceaus¸escu's Victory of Socialism Boulevard (now known as Bulevardul Unirii — Union Boulevard) and the hulking marble bulk of the House of the People, now officially called the Palace of the Parliament.

Guided tours of the huge palace are available daily 10 a.m.–4 p.m. and can be booked through your hotel concierge; prepare to be inundated with mind-boggling numbers. The 12-story building has 3,100 completed rooms, including 64 reception halls. When fully lit, the building burns through the equivalent of the entire city's electricity every four hours. Underneath the building there is a network of tunnels, garages and even a nuclear bunker.

The rear of the palace now houses the National Museum of Contemporary Art (open 10 a.m.–6 p.m., Wednesday–Sunday), which is a great place to experience the confident reinvention of Romania's cultural expression.

The Museum of the Romanian Peasant — a past recipient of the European Museum of the Year award — provides an introduction to the country's timeless rural heritage. The centerpiece is the "house in the house," an actual village cottage that has been deconstructed to allow visitors to peer into it from every angle. In the grounds outside is a relocated 18th-century Transylvanian wooden church.

Taking the rural theme still further is the National Village Museum, situated on the shore of Lake Herastrau in northern Bucharest. Originally opened in 1936, this open-air museum recreates Romanian village life with a rambling collection of authentic buildings.

One aspect of Bucharest's heritage has been lost forever. Before World War II, there were 800,000 Jews residing in Romania. Today they number just 10,000. What remained of the old Jewish Quarter was demolished by Ceaus¸escu in the 1980s. One fragment — a 19th-century synagogue on Ma.mulari Street — survived, and today it houses the intensely moving Jewish History Museum.

International flights arrive at Henri Coanda. International Airport (OTP), 10 miles northwest of downtown Bucharest.
The only official airport taxis are operated by Fly Taxi; expect to pay $30 for the ride into town.
There is also a regular bus service, which takes about 60 minutes (traffic permitting), departing every 15 minutes.
For more information, visit www.RomaniaTourism.com/Bucharest.html#BucharestByAir

Time Zone: GMT +2
Phone Code: 40 Romania, 21 Bucharest
Entry/Exit Requirements: U.S. citizens must have a valid passport to enter Romania and may stay up to 90 days without a visa within a given six-month period. For stays longer than 90 days, obtain an extension of stay from the Romanian Immigration Office.
Currency: Leu (plural, lei)
Official Language: Romanian is the official language. English is the most popular second language, especially among younger Romanians.
Key Industries: Financial services, IT, retail, food and beverage production, agriculture