Home About Romania Romania in the Press Visions of Heaven

Visions of Heaven; Romania's famous painted monasteries are the beautiful legacy of a bygone era and vibrant centres of faith for today 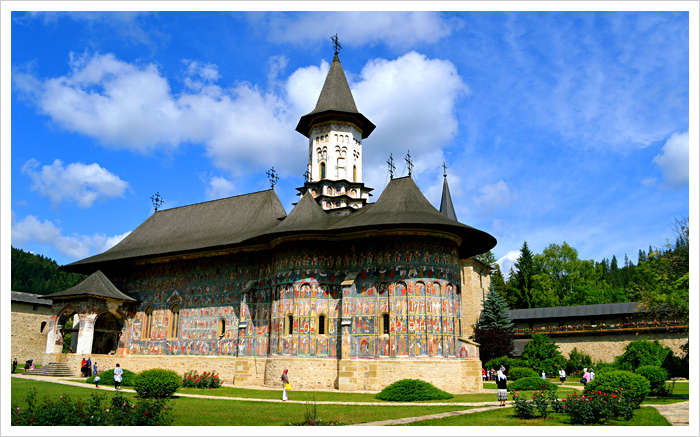 Every day, Tatiana Drelcuic sees visions.
"I see Heaven, I see angels ... I see God, because the images are the gateway to God," she says, describing the exquisite iconography that covers the walls of Moldovita monastery where she lives with her fellow nuns.    Monasteries (more than 60 of them) are thickly scattered across the forested and mountainous northeastern Romanian countryside; many have exterior decorations and seven - Moldovita, Humor, Sucevita, Arbore, Voronet, Patrauti and Probota - have earned fame (and UNESCO recognition) for the unique and enduring beauty of their artistry.   But don't get the idea that they're just attractive relics; they're are also active, vibrant centres of faith in a land where religious experience is blossoming anew after decades of suppression.

At Moldovita, sightseers taking tours led by some of the resident nuns mingle with worshippers lighting votive candles or offering prayers before icons, while other sisters go about their devotional or housekeeping duties.  Sister Tatiana tells me of the history of the monasteries and the significance of the gorgeously wrought paintings.   The churches, she says, date from turbulent times during the late 15th and early 16th centuries when this region was the frontier battleground between Christian Europe and the Islamic Ottoman Empire.   Moldavia's ruler Stefan the Great promised a friend, who also happened to be a monk, that he would build a church as a thanksgiving offering after each victorious battle.   Other princes (including Stefan's sons) and nobles followed Stefan's example, and the churches that sprang up soon became religious and strategic centres (many of them are surrounded by thick walls and towers). Soldiers and local residents would often congregate within the fortifications for protection and for services.

Since the churches are relatively small, not everybody could fit inside, so someone got the idea to paint the outside walls, both for inspirational and educational purposes.   "People back in those times couldn't read," says Ana Maria Dora, my guide on a day-long circuit of some of the painted monasteries, "but they had to understand the Bible. So, they got artists to paint scenes from the Bible on the churches."

Each of the churches has a distinctive background colour; Moldovita's is gold - and architectural styles vary. But they share many common motifs depictions of the Holy Family, angels, saints, martyrs, bishops, Old and New Testament passages and religious themes.   "The irony," Ana observes, "is that back then they read the paintings to understand the Bible, and now we have to read the Bible to understand the paintings." Scanning Moldovita's walls, it's easy for even a non-biblical scholar like me to identify a magnificent representation of the Last Judgment (for some reason I can always recognize that one), with fierce-looking demons trying to snatch souls away from angels. In a revealing touch of medieval propaganda, Mohammed is shown among the condemned. "The pictures aren't just about religion," says Ana. "They're also about philosophy and history. They show important battles, like the siege of Constantinople and the sinners are shown as our enemies - the Turks or the Tartars. There are also scenes from daily life, and Jesus is sometimes shown wearing traditional Moldavian clothes."

Some of the images are naturally showing some wear and tear (and the walls are also etched with graffiti from countless visitors over the centuries), but after five centuries of exposure to weather and warfare, the clarity of the detail and the brilliance of the background colours is really nothing short of miraculous.   The most striking of all the monasteries is Voronet, whose panoramic frescoes - earning it the oft-quoted nickname "the Sistine Chapel of the East" - are surmounted on a background of luminescent blue. "It was a special pigment created from sand, minerals and water in proportions that modern artists haven't been able to duplicate," says Ana.    But for all their spellbinding splendour, what I found most engaging about visiting the monasteries was the fact that they're still dynamic religious communities, teeming with priests, monks and nuns eager to talk about their lives and the importance of their faith, which one priest, Father Daniel, told me is experiencing a renewal after decades of suppression.  "I am the director of a seminary and I have three classes with more than 100 students in each," he says. "There are 25 monasteries that have just opened and are all staffed with young people."   He recalls the hardships the church suffered under Romania's former Communist leadership, but says that faith endured.

"For all we suffered then, God has brought us many blessings." The last stop on our journey (a circuit of the main monasteries can be completed comfortably in a day), is Humor monastery. Two nuns, their habits protected by workers coveralls, scale a ladder with paint cans and brushes to whitewash their dormitory.   The tree-covered grounds are quiet (the tourist buses have gone) and have a contemplative atmosphere, inviting you either to reflect on the themes presented or just admire the skill of the anonymous artists. The red hue of the background is accentuated by the setting sun.   Sister Maria, who can't be older than 20, giggles nervously as she struggles through her English narration of the church's features, including its version of the Apocalypse which portrays the Devil as a woman (no comment).   As she speaks, another nun slowly circles the church, rhythmically tapping a small hammer against a long board, called a toaca. Sister Maria explains that it's used to announce the daily services.   "The first toaca was used by Noah to call the animals to the safety of the Ark," she says. "Now it's used to call all souls to the sanctuary of the church."